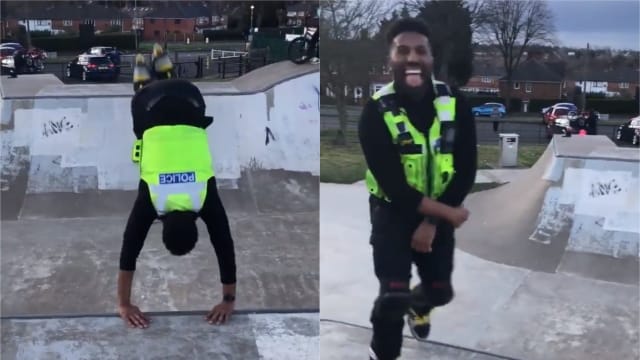 A police constable in Birmingham delighted thousands on social media after performing skating tricks while on the job.

According to West Midlands Police Twitter accounts, Pc Demetrius Washington had been carrying out patrols and chatting to youths after multiple recent robberies.

To help with the engagement process, Pc Washington appeared to employ novel tactics to communicate with the youngsters, donning a pair of skates and showing off his moves, including a 360 degree spin and a couple of handstands.

“Conducting patrols in Oaklands Rec in relation to recent robberies and engaging with the kids, Pc Washington thought it would be good to dust the skates off and show them how its really done,” Stechford Police tweeted.

The video gained more than 20,000 views in well under 24 hours, while one Twitter user commented: “Winning respect! Different but well done!”