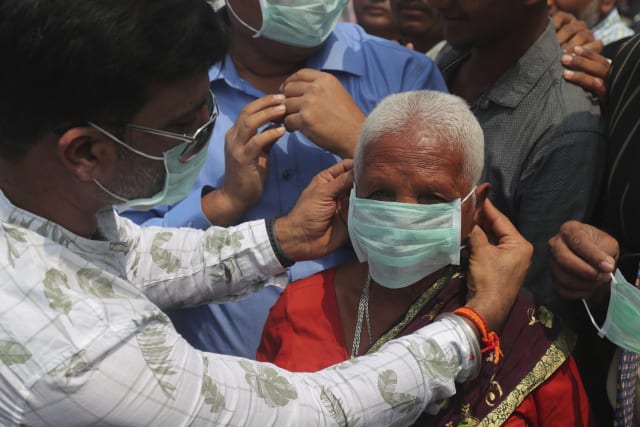 Being older, showing signs of sepsis and having blood clots are key factors associated with a higher risk of death with coronavirus, according to research from China.

The study, published by The Lancet, examined 191 patients with confirmed Covid-19 at two hospitals in Wuhan – the epicentre of the outbreak.

Although the authors noted interpretation may be limited due to the sample size, it is the first time researchers have examined risk factors associated with severe illness and death of adults admitted to hospital with coronavirus.

Of the 191 patients admitted to Jinyintan Hospital and Wuhan Pulmonary Hospital, 137 were discharged and 54 died.

The study involved adults aged 18 or over with laboratory-confirmed Covid-19, who were admitted after December 29 and had been discharged or died by January 31.

Researchers found that on average, patients were middle-aged with a median age of 56, most were men (62%) and around half (48%) had underlying chronic conditions – with the most common conditions being high blood pressure (30%) and diabetes (19%).

Analysis suggested that, compared with survivors, patients who died were likely to be older and had a higher score on the sequential organ failure assessment (Sofa).

The higher the Sofa score, the more likely that the patient’s condition deteriorated due to organ failure caused by sepsis.

Researchers also found that those who died had elevated blood levels of the d-dimer protein – which is usually found when a blood clot has formed.

Dr Zhibo Liu, from Jinyintan Hospital, said: “Older age, showing signs of sepsis on admission, underlying diseases like high blood pressure and diabetes, and the prolonged use of non-invasive ventilation were important factors in the deaths of these patients.

“Poorer outcomes in older people may be due in part to the age-related weakening of the immune system and increased inflammation that could promote viral replication and more prolonged responses to inflammation, causing lasting damage to the heart, brain and other organs.”

The study was published after one expert said patients face a “dual-track” of damage from Covid-19.

The cilia – tiny hair-like structures that line airways in the lungs which protect the airways and help remove excess mucus – of an infected person can stop working, leading to more mucus settling on the lungs.

Damage is also caused by an “overly exuberant immune response”, according to Dr Simon Clarke, associate professor in cellular microbiology at the University of Reading.

As numbers rise, symptoms have ranged from people who are infected but have no symptoms, through mild symptoms, to severe cases requiring hospital treatment and death.

The main symptoms listed on the NHS website are a cough, shortness of breath and a high temperature.

The World Health Organisation adds that while the most common symptoms are fever, tiredness and dry cough, symptoms can also include aches and pains, nasal congestion, runny nose, sore throat or diarrhoea.

Dr Clarke said: “The way the virus works… it basically targets those cells that have cilia on them, so your cilia stop working and basically you get more mucus settling in your lungs than you would ordinarily get.

“The other thing that happens is you get an overly exuberant immune response which causes damage.

“It is really common with all sorts of infectious diseases, people don’t realise that quite often the damage that is done to them during an infection is done to them by their own immune system, and it’s overreacting to the infection and damaging them, rather than being the result of any toxic molecule.

Dr Clarke said most patients need “bed rest and paracetamol”, while extreme cases – where patients have trouble breathing – need to be taken to hospital.

People who are more at risk, such as those with underlying medical problems, see the illness progress in the same way but more quickly, he added.