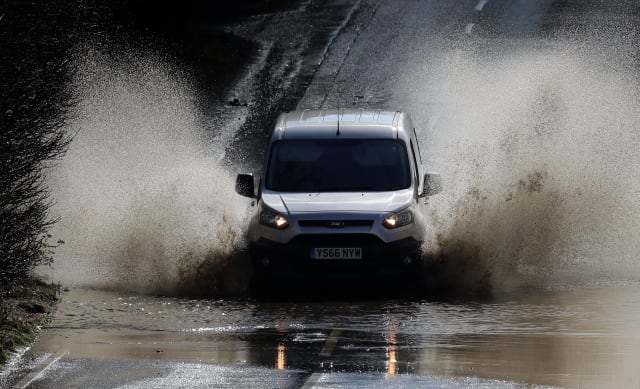 Parts of Wales have been hit by more heavy rain just weeks after Storm Dennis devastated areas of the country – with further downpours forecast.

A Met Office amber warning is in place for parts of mid and north-west Wales with fast-flowing or deep floodwater likely, causing a “danger to life”.

Areas already hit by flooding in February, including Builth Wells and Newtown in mid Wales, are among those expected to be worst hit, with flooding likely to cause damage to homes and businesses.

Pantmawr, in Powys, saw 23.8mm of rainfall in around four or five hours from Monday afternoon with more expected overnight and some areas on higher ground due to get up to 100mm.

The amber warning was in place from 6pm on Monday and runs to 10am on Tuesday, with a risk of power cuts and travel disruption likely.

A yellow weather warning, a grade below amber, is in place for areas of south, west, mid, and north Wales, including areas recently flooded during Storm Dennis.

The warning, currently in place from 3pm on Monday until 12pm on Tuesday, also warns that homes and businesses “could be flooded”.

A similar warning is in place for the north of England, including the cities of Leeds, Bradford, Wakefield and Huddersfield, with a projected 50mm of rain – a little under half the monthly average for March – due to fall.

But good news for flood-hit areas could be on the horizon with the long-term forecast predicting drier weather.

Met Office meteorologist Marco Petagna said: “Although there’s going to be a lot of rain in the next 24 hours, beyond that, although it will be fairly unsettled, it doesn’t look like any one particular place will be in the firing line to see persistent, heavy, rain.

“There’s some rain around but it’s not as focused.

“It’s generally a colder second half to the week with sunshine and some showers, but still quite blustery.

“There’s a hint in the second half of the month things might become a bit quieter.

“It’s still 10 days away but there are some tentative signs we might get some drier weather in the long term.

“But certainly in the next week or so it’s going to be very changeable.”