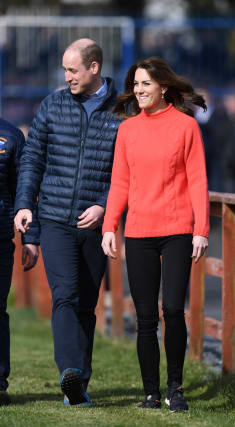 The Duke and Duchess of Cambridge have marked International Women’s Day by sharing stories of some of the most inspirational women they have met in the last year.

On the @kensingtonroyal Instagram account, the couple shared a montage of four photographs taken in the course of their duties.

“To mark the day we are celebrating some of the remarkable and inspiring women we have met over the last year,” they said.

The first photo, taken during their trip to Pakistan in October, featured the women of the SOS Children’s Village of Lahore.

They wrote: “Staff provide children, deprived of their natural parents, with an environment which is as close as possible to a natural home, along with loving care, security, higher education and job-training.”

The second image shows a picture of champion swimmer and life-long volunteer coach Eileen Fenton being awarded an MBE by William in November.

It was captioned: “Eileen was the first woman, at the age of 21, to complete the Cross Channel Swimming Race in 1950, and went on to train scores of first-class long distance and sprint swimmers.”

Also featured was an image of Kate with staff at a maternity unit in a south-west London hospital.

It read: “The incredible staff at Kingston Hospital’s Maternity Unit: Their philosophy of care is to ensure women are at the centre of their service.”

The final image of 82-year-old Yvonne Bernstein was taken by Kate herself.

Mrs Bernstein, who is Jewish, was a hidden child in France throughout most of the Holocaust.

“The Duchess photographed Yvonne Bernstein with her granddaughter Chloe earlier this year as part of the commemorations for the 75th anniversary of the end of the Holocaust,” the caption said.

The Duchess of Cornwall also used the occasion to shine a light on her work with domestic abuse charities.

A post on the @clarencehouse Instagram page quoted a speech Camilla gave at the UK charity SafeLives last month.

“With each story that is told, the taboo around domestic abuse weakens and the silence that surrounds it is broken, so other sufferers can know that there is hope for them and they are not alone,” she said.

The Duchess of Sussex used one of her final engagements before stepping back as a senior royal to celebrate International Women’s Day and women of the future at the Robert Clack School in Dagenham, east London.

A photo on the @sussexroyal account showing Meghan on stage with a male student was captioned: “The Duchess of Sussex visited Robert Clack School, to celebrate the women of the future, and also highlight the important role men and boys play in International Women’s Day.”

In a speech, she urged the boys in the audience to “continue to value and appreciate the women in your lives and also set the example for some men who are not seeing it that same way.

“You have your mothers, sisters, girlfriends, friends in your life, protect them.

“Make sure that they are feeling valued and safe and let’s all just rally together to make International Women’s Day something that is not just on Sunday, but frankly feels like every day of the year.”

Princess Eugenie shared a series of photos of women she finds inspirational on her Instagram story.

They included activists, conservationists, academics, the Queen and her mother, Sarah, Duchess of York.

Also on the list was Mags McHugh, the nurse who cared for her following an eight-hour operation for the spinal condition scoliosis when she was 12 years old.