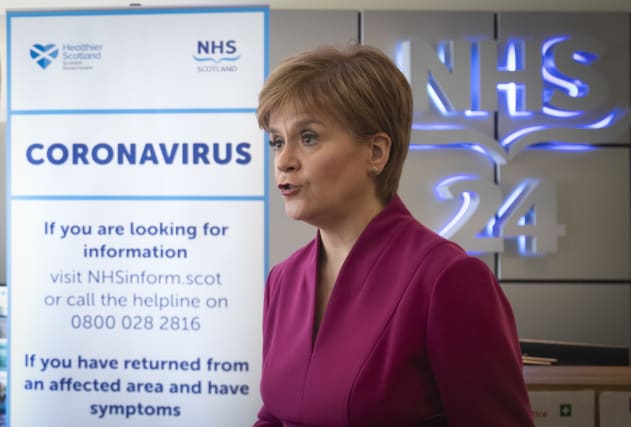 Nicola Sturgeon has said the need for more funding for the NHS is “inevitable” as the UK looks to tackle coronavirus.

The UK Government has reported 206 positive cases of Covid-19, the illness caused by this particular strain of coronavirus, since the outbreak began.

Speaking on Sky News’ Sophy Ridge On Sunday, the First Minister reassured Scots that the country is prepared for a further outbreak – which exceeds the current total of 16 positive cases – and that further measures are being put in place.

Ms Sturgeon was speaking ahead of the announcement of the UK Budget by Chancellor Rishi Sunak on Wednesday.

She said: “I think it’s pretty much inevitable that we will need additional resources for our National Health Service, although we are right now working within the resources that are available to the health service.

“Scotland has just passed its budget for the year ahead which in itself delivers record funding for the National Health Service.

“But the pressures that are likely to come from coronavirus in the weeks ahead will mean we need to see additional resources, so I very much hope the Budget has positive things to say about that.”

The First Minister also hoped there would be a “relaxation” of the rules of Universal Credit – the UK Government’s flagship social security programme – which would ensure users are not sanctioned if they are forced to self-isolate.

She said: “We don’t want people who have been advised to self-isolate to minimise the risk of passing the infection on to others to be sanctioned on their benefits.

“There’s so much to do; all of the governments across the UK are working very closely and very constructively together – as people have a right to expect.”

Speaking on the same programme before the First Minister, the Chancellor said he is “absolutely” ready to provide more funding for the NHS.

“It’s important to remember that we’re able to do that because we’re in a strong position today.

“It’s because of responsible management of public finances in the past several years that I can sit here and tell you, yes, I can take whatever steps are necessary to help us get through this.”

Ms Sturgeon also sought to reassure the public that most people will have “mild” symptoms if they contract the disease and will recover “relatively quickly”.

She also reiterated a plea, saying: “The public have a part to play in helping us contain and then slow down the spread of the virus by following all the personal hygiene advice that’s there about hand washing and what to do when you cough and sneeze.

“All of that makes a difference and it really matters.”