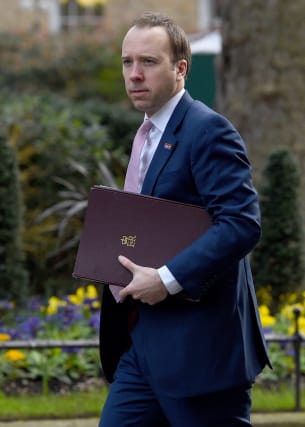 The Health Secretary has praised a group of people released from quarantine after returning from a coronavirus-hit cruise ship for setting a “good example” to the public.

Matt Hancock said tackling the Covid-19 outbreak was a “national effort” that may require more people to self-isolate at home.

A group of 30 Britons and two Irish nationals were released from isolation at Arrowe Park Hospital in the Wirral on Sunday having been given the all-clear from infection.

They were repatriated from Japan last month having been passengers on the coronavirus-stricken Diamond Princess cruise ship.

Around 700 people caught the illness while the ship was held in quarantine for several weeks – more than a quarter of the 2,600 people on board.

Thanking Arrowe Park’s staff and the quarantined group, Mr Hancock said: “Tackling coronavirus is a national effort and they have set a good example for the rest of the public as more people may need to self-isolate themselves at home.

“Public safety is our top priority and we all have a part to play in containing the spread of the virus.”

His comments came as the number of confirmed coronavirus cases in the UK rose to 211 on Sunday morning, following two further cases reported in Wales.

In Italy, more than a quarter of population has been placed in mandatory quarantine as the Government attempts to stem the spread of the coronavirus.

One unnamed man diagnosed with coronavirus in the UK told BBC Radio 4 he was “shocked” and “surprised” at the lack of coronavirus information when he arrived at Manchester Airport after a skiing holiday in northern Italy last weekend.

Immediately self-isolating at home with his wife, he said the experience of being tested was “frightening” but was now feeling “well recovered” as he waited for a further test.

“By self-isolating think of all the lives we’ve saved,” he said.

Mr Hancock has set out plans contained in emergency legislation to deal with the impact of the virus.

The Bill, which is likely to go through Parliament by the end of the month, is expected to include measures to allow some court proceedings to be conducted via telephone or video.

Volunteers will be given additional employment safeguards, allowing them to leave their main jobs and temporarily help health and social systems in the event of a widespread pandemic.

The chairman of the Royal College of GPs, Professor Martin Marshall, told Sky’s Sophy Ridge on Sunday that tackling coronavirus will likely lead to hospitals having to cut down on “other work”.

He also said he expected retired doctors and other medical professionals to answer the Government’s call to assist with the crisis.

“The suggestion at the moment from the chief medical officer is that those who are a couple of years from retirement and might still have their registration could be quickly brought back on to the medical register and would be able to practise,” he said.

“Most likely these doctors, because they are in the higher risk patient group, would not do face-to-face contact but there’s lots of things they can do – managing 111, providing online care or telephone-based care.”

Dr Margaret Harris, from the World Health Organisation, speaking on the BBC’s Andrew Marr Show, said supporting health workers with training and equipment should be the “number one priority”.

She added: “And they need back-up, they need other people to come and do the shifts. If they’re working massively, they are tremendously at risk.”

She also highlighted the British Army’s experience in setting up field hospitals, suggesting it should be factored in to coronavirus planning.

The Chancellor, Rishi Sunak, preparing to deliver his first Budget, said on Sunday the Government was ready to deliver “whatever action is required” to deal with the crisis.

On Monday, Prime Minister Boris Johnson will chair a meeting of the Government’s emergency committee, Cobra, while sports governing bodies and broadcasters will attend a meeting with the Department for Digital, Culture, Media and Sport to discuss how to handle the outbreak’s possible impact on the sporting calendar.

Speaker Sir Lindsay Hoyle will chair a meeting of the House of Commons Commission to discuss Parliament’s response.

Environment Secretary George Eustice will hold further talks with retailers to discuss support for vulnerable groups who may have to self-isolate.

The Department of Health has said more than 21,000 people have been tested for coronavirus in the UK, while two people have died after testing positive.