Harry and Meghan in last official engagement before Megxit 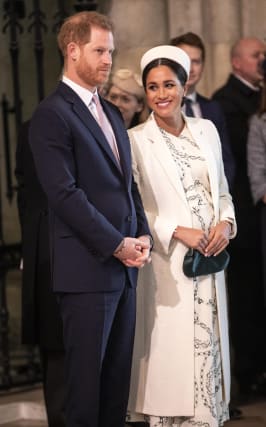 The Duke and Duchess of Sussex are preparing to make their final official appearance as senior royals as their UK farewell tour comes to an end.

Harry and Meghan will join the Queen and other key members of the family for the Commonwealth Day service at Westminster Abbey – their last public royal duty before they walk away from the monarchy.

Sixth in line Harry and American former actress Meghan will gather with the monarch, the Prince of Wales, the Duchess of Cornwall and the Duke and Duchess of Cambridge in the central London church.

From March 31, the monarch’s grandson and Meghan will no longer use their HRH styles as they pursue a new life of personal and financial freedom, mostly in North America.

Aides have said the couple, who are retaining Frogmore Cottage in Windsor, will be in the UK regularly.

But this final official appearance is a poignant milestone as they prepare to embark on their future away from the royal family.

The televised service at the abbey is a key annual event in the calendar for the Queen who is head of the Commonwealth.

But this year’s ceremony is likely to be remembered for being Harry and Meghan’s royal swansong.

Their goodbye tour – a flurry of appearances in the UK – has including the Endeavour Fund Awards, a military musical festival at the Royal Albert Hall and Meghan’s secret visit to a school in Dagenham, east London, to celebrate International Women’s Day.

The Commonwealth Service will also be the first time the duke and duchess have appeared with the royal family since their bombshell “Megxit” announcement in January.

Tradition dictates Harry, who is not a future king, sits with Meghan in the second row of seats behind the Queen, Charles, Camilla, William and Kate during the service.

The duke and duchess were pictured standing alongside William and Kate in the gothic abbey last year when Meghan was pregnant with Archie.

All eyes will be on how the couples interact at this year’s ceremony.

William and Harry have faced a turbulent time following a rift that began ahead of Harry’s wedding to Meghan.

Harry said in an ITV documentary filmed during his Africa tour that he and his brother are on “different paths” and have good and bad days in their relationship.

The Duke of York was at the service in 2019, accompanying the Queen as she arrived.

But he will be absent this year, having stepped down from public life following his disastrous Newsnight appearance over his friendship with convicted sex offender Jeffrey Epstein.

Harry and Meghan last appeared alongside the royals four months ago on Remembrance Sunday at the Cenotaph in November.

Coverage of the service will be broadcast live on BBC One from 2.15pm, and across the BBC World Service.

The Queen in her Commonwealth Day message has praised the diversity of the family of nations whose blend of traditions “serves to make us stronger”.

In her annual message, the head of state highlighted how global connectivity makes people aware their “choices and actions” can affect the “well-being of people and communities living far away” – and inspires many to be more careful with natural resources.

Ahead of their wedding, Harry and Meghan highlighted the Commonwealth as a priority for their royal duties.

Harry said: “Both of us have passions for wanting to make change, change for good, and with lots of young people running around the Commonwealth, that’s where we’re going to spend most of our time hopefully.”

Stepping down as a working royal means Harry must leave his role as Commonwealth Youth Ambassador.

But he will remain president of the Queen’s Commonwealth Trust and Meghan will still be the Trust’s vice-president.