Five rescued after cars trapped by tide on causeway 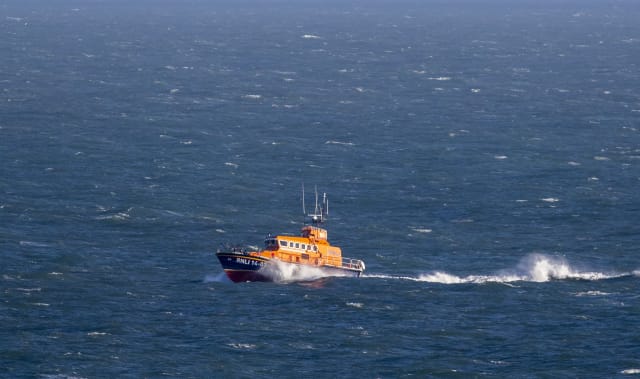 Five people, a dog and a wedding dress have been rescued after two cars were cut off by the incoming tide on the Holy Island causeway.

The cars’ occupants, which included a three-year-old child, an elderly couple, a Dobermann and the wedding dress, were rescued by lifeboat crews on Sunday afternoon.

Emergency services have been praised for their quick response to the potentially life-threatening situation, which saw the cars filling with water and at risk of being washed away.

“One vehicle contained two adults and a three-year-old child, who were starting to panic as the choppy sea was breaking over the windows and had filled the car with sea water.”

Coastguard officers waded out to the car containing the two adults, child and dog, who were taken to shore by the inshore lifeboat and described as “wet, cold and in shock”.

The RNLI spokesman said: “The lifeboat crew then checked on the welfare of the occupants of a second trapped car, who were an elderly couple still sitting in their flooded vehicle with the sea splashing on the car windows.”

The couple, who were at risk of hypothermia, were also taken to shore by lifeboat, where they were checked by paramedics.

Ian Clayton, Seahouses Lifeboat operations manager, said: “This was a call that required a quick response as the cars were beginning to float, and were at risk of being washed away, which could have resulted in loss of life.

“Good co-operation with our colleagues from the Coastguard, Berwick RNLI, Northumbria Police and North East Ambulance ensured a potentially dangerous situation was safely managed with a positive outcome.”