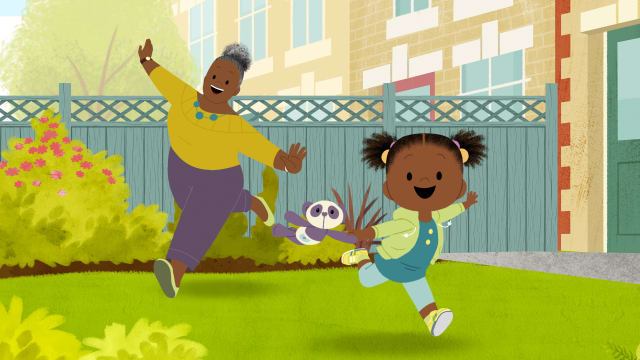 The special bond between children and their grandparents will be celebrated in the first animation on CBeebies to focus on a black British family.

JoJo & Gran Gran is about the everyday adventures of a four-year-old girl who is cared for by her fun, wise grandmother while her parents are at work.

Gran Gran is proud of her Saint Lucian heritage and teaches JoJo about the Caribbean island’s culture.

Gran Gran (voiced by Cathy Tyson) and JoJo (Taiya Samuel) are based on characters created by Laura Henry-Allain, whose books were inspired by her relationship with her own grandmother.

Marie-Helena, who looked after Henry-Allain and her five siblings when the author was very young, moved back to Saint Lucia and remained there until her death in 2009 aged 101.

Henry-Allain, who has two grown up sons, told the PA news agency her grandmother, who she called “Mama”, had been a talented seamstress who was very creative and “adored her grandchildren”.

The 51-year-old former teacher, nursery manager and Ofsted inspector – whose middle name is Josephine – said her grandmother would be very proud of the show, adding: “I’m pinching myself.”

It is never specified how often Gran Gran cares for JoJo and the viewers learn little about her parents although family relationships are at the centre of the series.

JoJo and Gran Gran video call Great Gran Gran (Llewella Gideon), who lives in Saint Lucia, but when modern technology lets them down in one episode, JoJo learns how to post a drawing and why it takes a few days to arrive on the island.

Each of the 44 episodes, 11 for each season, is inspired by the passing of time, covering topics such as life cycles, growth or activities like baking a cake or catching a bus. Children talk about the theme during a live action segment.

JoJo and Gran Gran live near each other in a bustling London neighbourhood and the local park takes some of its inspiration from Paddington Rec near Henry-Allain’s childhood home in west London.

Gran Gran is a lively character, a world away from the frequent portrayal of grandparents with walking sticks or a “bun on their head”, series producer Tom Cousins told PA.

“In reality we have got grandparents who are really active,” he added.

More than 100 people have worked to bring the show to the small screen, and the look of the animation was defined by award-winning US-based Colombian illustrator Leo Espinosa after Cousins “wrote to him on the off chance”.

Executive producer Tony Reed said: “Reflecting the lives of our diverse CBeebies audience is hardwired into everything we do, with shows such as Apple Tree House, Pablo and Something Special amongst many others.

“JoJo & Gran Gran is a perfect example of this, but more than anything else it has the universal appeal of a warm and close relationship between a grandchild and grandparent that will very much resonate with our audience.”