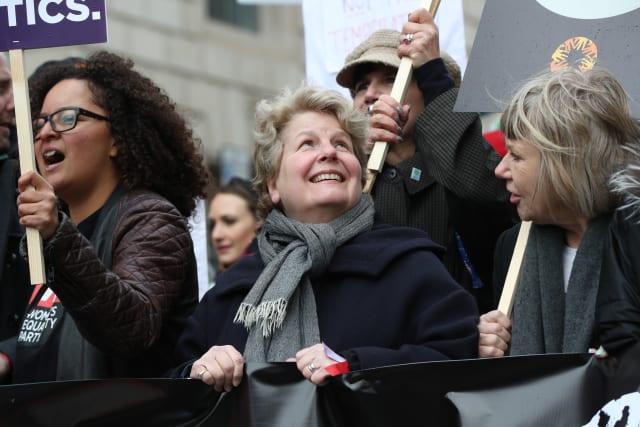 Hundreds of people have marched down Whitehall in support for International Women’s Day.

There was a heavy emphasis on the growing climate crisis at this year’s event and the impact it is having on women in some of the poorest parts of the world.

Others sported the green, white and purple of the women’s suffrage movement.

Speaking ahead of the event on Sunday, TV presenter and women’s rights activist Sandi Toksvig said she was “getting impatient” at the slow rate of change in both achieving gender equality and tackling the climate crisis.

She told the PA news agency: “I celebrate International Women’s Day every year but I don’t see big movement.

“Of all those issues the most urgent is climate because this is something on which we must co-operate – it is not something where a few men can decide we need slightly better cars to drive.”

The former Great British Bake Off presenter said the climate crisis was “a gendered thing”.

“We need men who are running the corporations to make massive changes and they need to make them today.”

“I feel right now this resistance is louder and noisier than it has been for a long time and it for me it feels like the fifth wave of feminism, you have this demand, you have this build up if an issue and then things happen,” she said.

Game of Thrones actress Natalie Dormer said she was also frustrated by the pace of change despite laws being in place to ensure equality.

Citing the example of the gender pay gap, she said: “It feels a nonsense to me that we are even having this debate in a country like Britain.

“Obviously different areas of the world develop at different times and women have to fight at different rates but for us, in a cosmopolitan country, it is absolutely ludicrous that this is not sorted.”

Also on the march was actor George MacKay, who recently appeared in the Oscar-nominated 1917.

He said it felt like the film industry was finally starting to wake up to the lack of diversity and gender equality.

“Representation (on screen) is obviously very important but oftentimes you don’t realise that behind the camera so much of it is led by women – written by women, directed by women.”

He said men in the industry were often oblivious to the fact there were no women in the room.

“You get used to what you know, especially for me, my blindness has been that I haven’t questioned anything because to be frank it’s worked for me,” he said.

“I’ve always seen myself represented and I’ve never questioned why I haven’t walked into a room and felt compromised.”

He added:“I think sometimes you know what you know and I think it takes something to make you question it.”

Earlier on, protesters from the Extinction Rebellion protest staged a topless demonstration across Waterloo Bridge.

A total of 31 women gathered on the bridge – sometimes known as the Ladies’ Bridge in honour of the female construction workers who helped build it – with the worlds “climate rape”, “climate murder”, “climate abuse”, “climate inequality” and “climate justice” written on their bodies.

A spokeswoman for the group said: “It’s mainly women in poorer countries in the global south that are experiencing the increase in violence but this will be the reality for all women if the climate and ecological crisis continues to go unaddressed.”

“We are here to raise the alarm about what is happening to our sisters around the world and to tell women in the UK the climate and ecological emergency is your issue – it will affect you as a woman if we do not persuade our Government to take urgent action starting now.”