‘Hope you didn’t mind me cuddling your wife’: schoolboy writes to Harry 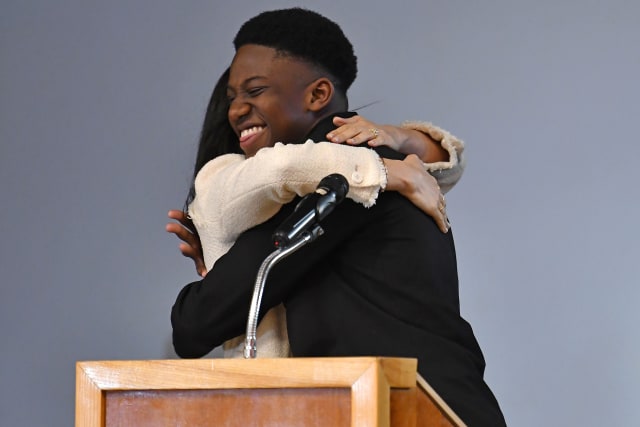 A teenage school boy who hugged the Duchess of Sussex has written to the Duke after “cuddling” his wife.

Aker Okoye, 16, said he was “just so overwhelmed and shocked” to meet Meghan when she came to his school on Friday.

Addressing Harry, he said: “I hope you didn’t mind me cuddling your wife,” adding: “It was a pleasure to hear her speech and to speak in front of her as well.”

The student penned the note after he was pictured hugging the Duchess on stage at Robert Clack school on Friday.

In the letter, published in The Sun, the teenager also said he hoped to meet Harry one day, and wished the royal couple “good luck for the future” as they step back from senior royal duties.

The Head Boy jumped at the chance to meet the Duchess who visited the Dagenham school to mark International Women’s Day.

As he greeted her on stage he told his fellow pupils: “She really is beautiful. I had to speak the truth there.”

The 16-year-old said he was “starstruck” by the opportunity “to speak in front of someone so famous and important.”

He told the newspaper: “I’ve written the letter to make sure Harry doesn’t have a problem with it and to say sorry really and that I hope he didn’t mind.

“Meghan didn’t – she found it funny and I’m sure Harry will as well.

“When she asked which brave young man wanted to do a talk I jumped at the chance.

“I leapt up there. I thought it would be proper protocol to give her a cuddle.

The royal couple are due to take part in their last scheduled engagement on Monday when they attend the Commonwealth Day service at Westminster Abbey alongside other senior members of the royal family.

They will begin their new life as financially independent royals on March 31.