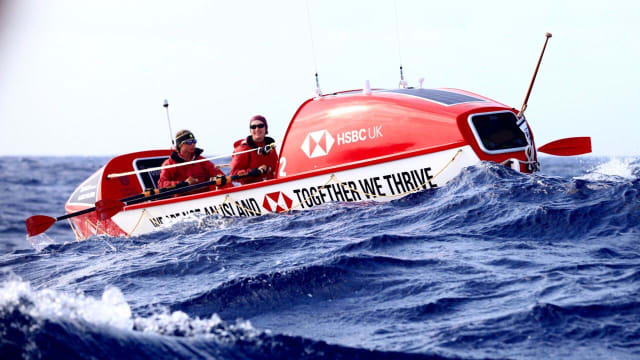 A 64-year-old has become the oldest woman to row an ocean after crossing the Atlantic in 86 days.

The pair set off from La Gomera in the Canary Islands on December 12 last year, rowing 3,000 miles (4,828km) to reach the shores of Antigua on Saturday March 7 – just in time for International Women’s Day.

They completed the Talisker Whisky Atlantic Challenge as the final crew to arrive successfully, a month- and-a-half after the fastest crew.

Ms Brewer said: “We never anticipated it would take us this long – we were hoping to finish in mid-February – so the extended row has been tough both mentally and physically.

“We were rowing 1.5 hours each in rotation, 24 hours a day, 7 days a week to finish before running out of food. For the past three weeks, we’ve been surviving on two meals a day and next to no sleep. We’re delighted to finally set foot on dry land.”

Their efforts have raised more than £45,000 for the Alzheimer’s Society and Street League.

HSBC employee Ms Brewer was inspired to take on the challenge after reading the first few pages of The Crossing by James Cracknell and Ben Fogle.

She met Ms Prestidge at the Poplar, Blackwall and District Rowing Club in London in 2013.

Before rowing the Atlantic, the pair had only rowed a marathon, the Thames and one sea row around Hayling Island.

The longest row they had ever done was still 2,850 miles (4,587km) short of the distance across the Atlantic.