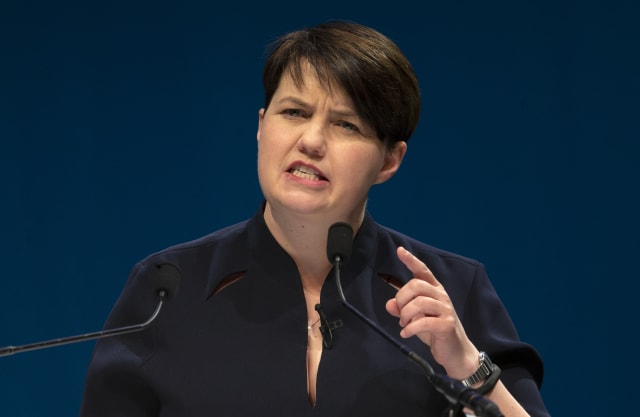 Politicians from across the spectrum have been urged to “up their game” as new figures show trust in politicians is lower amongst women.

The former Scottish Conservative leader Ruth Davidson made the plea as research by the John Smith Centre for Public Service at Glasgow University revealed 12% of women trust politicians in general, while just over a quarter (26%) felt this about their local MP.

The research, released ahead of International Women’s Day, found less than a quarter (24%) of women think that politicians try to keep their pledges, with the same number believing that democracy is working well in the UK.

Meanwhile 31% of men said democracy was performing well, with a slightly higher proportion (32%) saying they believed politicians try to keep their promises to voters.

Again almost a third (31%) of men said they trusted their local MP, with 16% of males trusting politicians in general.

In comparison 16% of men said they trusted politicians, with almost a third (31%) having this relationship with their local representative.

The John Smith Centre, which was set up in 2014 to promote a positive vision for representative politics, carried out the survey in 2019, with 1,424 people in Scotland, England and Wales taking part.

Ms Davidson, who will quit the Scottish Parliament ahead of next May’s Holyrood elections, said: “That so few women think politics is working for them should be of concern to us all.

“It’s clear that individual members need to up their game, as well as political parties being honest about the offers they make to the electorate and then actually delivering on their promises.”

She added: “The UK is not the only country that is experiencing a crisis of trust in its politics, but that trust will only be restored by the twin virtues of transparency in government and integrity of individuals.”

Meanwhile Labour MP Stella Creasy said politicians needed to “see and respect women in their own right and have the courage and confidence to ask why they don’t trust the political process”.

She stated: “In a world where trust and confidence in public life is not particularly strong for any group, women are more likely to feel politicians are lying to them, that democracy doesn’t works for them or that even if something is promised it will happen.

“That matters not least because women are more likely to use public services – and are less likely to be politicians themselves.”

Ms Creasy added: “The solutions to addressing these concerns are likely to be many – and some are not rocket science.

“This is a world where women make up just a third of MPs, 27% of members of the House of Lords, 35% of MSPs and the average councillor in England is 59, white and probably called David or John.

“It should not be controversial to recognise that the lack of women in leadership positions throughout public services and public life inevitably influences whether those fields are fully able to respond to the needs and interests of women, either in practice or in perception.”

She said that “in an area of life that remains dominated by men, women don’t always see themselves or what they care about as being political”.

Ms Thewliss continued: “Trust in politics is a difficult thing to restore, but we must all try. Politicians can be seen as distant, uncaring, and set apart from those they are supposed to represent. Policies are announced in great triumph in the heat of an election, and later quietly watered down or abandoned – in many cases because they were poorly conceived and not built with proper consultation and care.

“There are no easy answers to this, but we need to listen more and respond with honesty even when that is difficult.”