Meet the runners who take on the London Marathon backwards 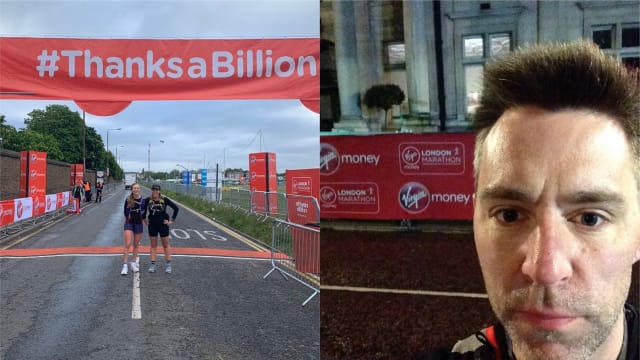 Not everyone gets a place in the London Marathon, but a select group of the unlucky ones have found a solution: run it backwards.

The backwards London Marathon – or nohtaraM ehT as some runners call it – takes place in the small hours of the morning before the main event.

Participants run from the finish to the start, concluding their efforts before the official 26.2 mile run begins on Sunday morning.

The idea could well have been born in 2011, when an ultra runner completed the course backwards, forwards and backwards before participating in the official race in a 104.8 mile effort.

Nine years later dozens of people are continuing to run the course backwards before thousands of official race runners descend on the start line.

Kris Maher, 35, from Tooting ran the route backwards in 2019 after missing out on a place in the main event.

“My pal picked me up in an Uber and we got to the finish. It’s quarter to three, you’re half asleep, you’re freezing and there are all these absolute nut jobs in running gear.

“It’s fantastically awkward but in a really good way, because you know you’re with like-minded people who want to do this stupid, stupid thing.”

A regular long-distance runner, Mr Maher, who ran the London Marathon in 2018, will be taking part in the backwards night run again in April.

“I’m buzzing about it,” he said, adding: “It just felt like a lad’s night out without any beers!”

One of the hazards of the reverse run comes in the form of late-night party goers, but one runner said such sights simply spurred her on.

“I remember getting the bus at 01.30, and everybody was finishing their night out as we were there in our running kit,” said Elise Downing who ran the race last year.

“Watching people passed out outside the station trying to get the last train home, I was like, maybe running is actually alright!”

With the party-goers out of the way however, the tranquillity of running around London at night apparently takes over.

“It was really fun running round all the places that are usually so busy,” said Ms Downing. “In the dead of night with nobody else around, it was just quite cool.”

For others the backwards marathon is a necessity after years of failing to get into the main event, but the night run offers unique experiences of its own.

“I’ve tried to get in (the London Marathon) for nine, maybe 10 years now, and every time I’ve failed!” said Will Kirk, 43, from Essex.

“It was one of my favourite runs I’ve ever done, from meeting this random Russian guy to bumping into people I knew, it’s just a really great atmosphere.

“If I don’t get into the London Marathon it’s not the end of the world. I’m quite happy running in the middle of the night because it’s funny.

“It’s a bit ridiculous, and I quite like being ridiculous.”