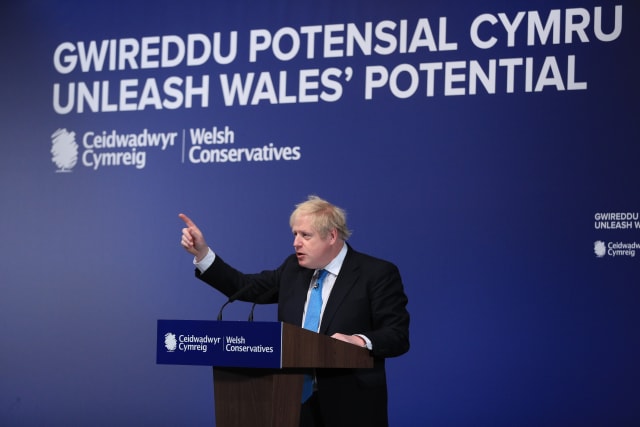 Prime Minister Boris Johnson has promised Wales will “have what it needs” to rebuild after major floods.

Speaking after appearing at the Welsh Conservatives conference on Friday, the Prime Minister said he was working with the Welsh Government to tackle the consequences of the flooding caused by recent storms.

He said: “We’ll be making about £4 billion available overall for building new flood defences and we’ll make sure that Wales has what it needs to sort out everywhere. We’re putting record sums into flood defences and flood remediation of all kinds.”

He said Secretary of State for Wales Simon Hart was speaking to Welsh First Minister Mark Drakeford about exactly what was needed, but at a “UK-wide level” the Government was giving “huge sums”.

During his speech at Llangollen Pavilion, the Prime Minister praised the exports of Wales as he claimed the country was the creator of the most popular TV show in Saudi Arabia.

He said: “I will leave you with this final and quite astonishing and most suggestive statistic I’ve heard for a while.

“What is the most popular TV programme in Saudi Arabia? Does anybody know? I will tell you. It’s called Sex Education, my friends, and it’s made in Newport in Gwent, isn’t that the most fantastic…

“I cannot think of a single fact that is more full of optimism for the future of humanity and our ability to come together.

“If the people in Saudi Arabia are responding to the Welsh approach to sex education, who can resist? Can Tehran be far behind? That is how Wales is helping to bring humanity together and break down barriers.”

It was not clear where the statistic was sourced from.

Mr Johnson also told the Welsh Tory conference there was a strong Welsh influence in Downing Street, in the form of dog Dilyn.

He said: “He is the randiest and most voluble Welsh occupant of No 10 since Lloyd George.”

Mr Johnson was returning to the constituency of Clwyd South, where he lost an election as a prospective MP in 1997.

He said: “I’m really overwhelmed that they have finally elected a Conservative MP.”