Percy French sculpture installed in shadow of Mountains of Mourne 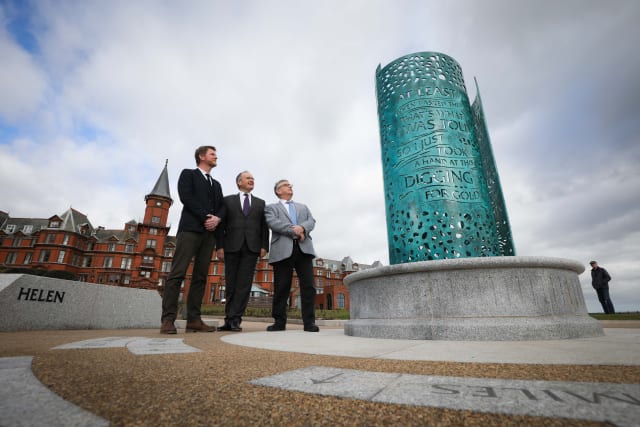 Celebrated Irish songwriter Percy French has been commemorated in a new sculpture installed in the shadow of his beloved Mountains of Mourne.

French’s song about the scenic Co Down mountain range is one of his best-known works.

The Mourne mountains now form the picturesque backdrop for the new artwork, which has been placed in the grounds of the Slieve Donard Resort and Spa in the town of Newcastle.

French, who was born in Co Roscommon in 1854, had a long association with Newcastle. His first wife Ettie, who died in childbirth, was a sister of Countess Annesley whose family owned the land on the Mountains of Mourne.

Commissioned to mark the centenary of his death in 1920, the sculpture incorporates the lyrics to the famous song interwoven in three metal panels.

It is bordered by four locally-sourced granite seats dedicated to French’s second wife Helen and their three daughters Ettie, Mellie and Joan.

It was unveiled on Friday by Pulitzer Prize-winning poet and French devotee Paul Muldoon.

He added: “This new installation will serve as a monument to the memory of a man who blazed a trail in his own era and has left a huge cultural imprint on the country.

“Percy would be pleased that so many elements of his life, including his wife and his three daughters, are celebrated in Mourne granite.”