No-one wants to be defined by their injury, Harry tells military celebration 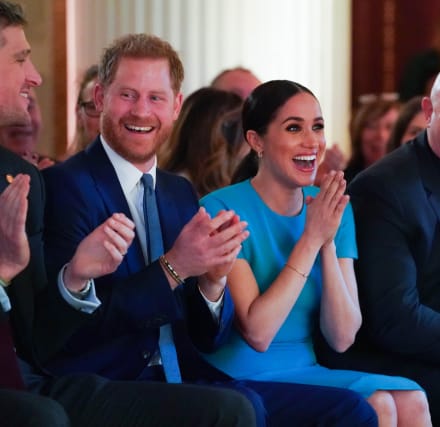 The Duke of Sussex embraced a “heroic” veteran and said “no-one wants to be defined by their injury” at an event celebrating the military, one of his last public engagements before quitting royal duties.

Harry and Meghan attended the Endeavour Fund Awards on Thursday night to recognise the sporting and adventure achievements of wounded, sick and injured service personnel.

It was the first time the Duchess of Sussex had carried out a public royal duty in the wake of the Megxit crisis but the couple seemed in good spirits as they smiled at the crowd who greeted them at Mansion House in the City of London.

The Endeavour Fund is a body set up by the Royal Foundation to finance inspiring sporting and adventure projects aiding the recovery of veterans.

Speaking to Forces News, the duke said he is “incredibly proud” to see the difference the scheme makes to veterans, as he stood next to former soldier Tom Oates.

Mr Oates has inspired others by turning his life around despite suffering from PTSD as a result of a difficult tour of Afghanistan and personal loss.

Only two years ago he was unable to get out of bed or speak with anyone due to his condition, he said.

The young veteran – who won the Henry Worsley Award earlier in the evening – was praised by Harry, who called his journey “remarkable” and “heroic”.

Speaking about the benefits of the fund, the duke said: “Everyone needs a purpose … what we try and do is creating opportunities for individuals to be able to excel and shine again because no-one wants to be defined by their injury.

“For some people, that’s about being part of a team again.

“For Invictus, to wear the flag on their sleeve, or just be part of a team of like-minded people, who get it and who you don’t have to explain your story over and over again to.”

Harry ended the interview by praising the strength of character gained from a military career.

The duke served with the Blues and Royals and the Army Air Corps in 2006 and, during that time, served as a forward air controller, co-ordinating air strikes on Taliban positions.

In his speech at the awards ceremony, he spoke of the honour of serving his grandmother amid reports of tensions in the royal family.

“Being able to serve Queen and country is something we all are rightly proud of, and it never leaves us. Once served, always serving!”