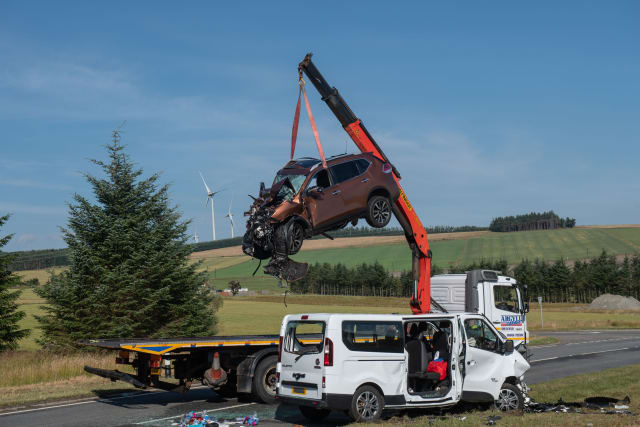 A man has denied causing the death of five people including his four-year-old son by dangerous driving.

They were killed in a crash which involved a minibus and a car on the A96 between Huntly and Keith in the north of Scotland on July 26, 2018.

Alfredo Ciociola, 47, who was behind the wheel of the minibus, is accused of driving dangerously, falling asleep, repeatedly braking, driving on to the opposite carriageway and colliding with the car.

Three people who were in the car – Audrey Appleby, 70, Edward Reid, 63, and Evalyn Collie, 69 – died, as did Ciociola’s four-year-old son Lorenzo and Frances Saliba, 63, who were passengers in the minibus.

Four people were also injured in the crash.

Ciociola’s lawyer Ian Duguid QC entered a not guilty plea on his behalf during a hearing at the High Court in Glasgow on Friday.

The 47-year-old, from Sicily, was not able to attend due to travel restrictions in place because of the coronavirus outbreak.

Lorenzo was travelling in the minibus with his parents, three-year-old brother and other Italians when the crash happened.

Ms Saliba was visiting Scotland to celebrate her 63rd birthday when she died.

Lady Stacey set a trial date for August 7 at the High Court in Edinburgh.

A hearing will also take place in late July ahead of the trial and the Crown will try and arrange for Ciociola to take part via video link from Italy in case travel restrictions are still in place.