Government reassures public over supplies after talks with supermarket bosses 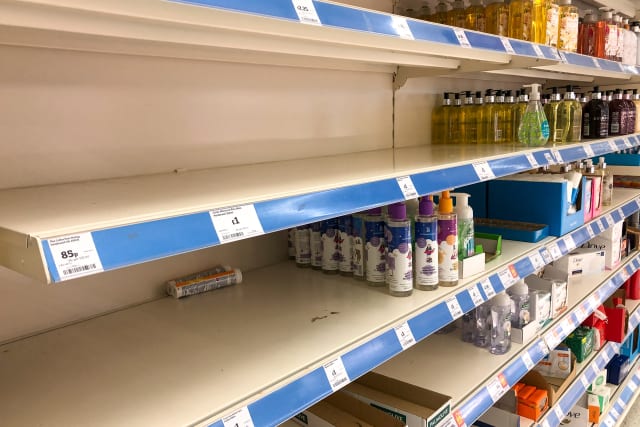 The government has pledged the public will continue to have “the food and supplies they need” during the Covid-19 outbreak amid fears of panic buying and empty shelves.

Environment Secretary George Eustice held talks with supermarket and trade body bosses over food supply contingencies on Friday and said he was reassured retailers were taking “all the necessary steps” to keep shelves well-stocked.

He said: “Today I spoke with chief executives from the UK’s leading supermarkets to discuss their response to coronavirus.

“The retailers reassured me they have well-established contingency plans and are taking all the necessary steps to ensure consumers have the food and supplies they need.

“Retailers are continuing to monitor their supply chains and have robust plans in place to minimise disruption.

“I was particularly keen to hear how Government could support their preparations and we’ve agreed to work closely together over the coming days and weeks.”

He added that there will be a further meeting with “industry, retailers and public sector organisations early next week” to discuss support for vulnerable groups who may be in isolation

The Environment Secretary said Government and industry will remain in regular contact on the issue.

A retail source told the PA news agency that “all the major supermarket CEOs” were on the call and told DEFRA that sales have “picked up” over the past week.

“Sales demand for certain products, particularly hygiene, has been high,” the source said.

“They said it is like Christmas but not in a good way. It is the same level of demand.”

Prior to the talks, Tesco chairman John Allan told ITV that criticism over the how the government has dealt with the incident was “a little unfair”.

“There may be a few lines where there are temporary shortages but at Tesco there is no shortage of food in overall terms.”

On Thursday, health secretary Matt Hancock said “We are working with the supermarkets to make sure that, if people are self-isolating, then we will be able to get the food and supplies that they need.”

Some UK shoppers have resorted to panic-buying at supermarkets in recent days as they look to build stockpiles of products ranging including hand wash, toilet rolls and pasta.

On a terrible day for the UK markets, with the FTSE 100 diving by more than 3%, supermarkets performed better than average, with Morrisons one of very few companies to finish Friday’s trading session in the black.