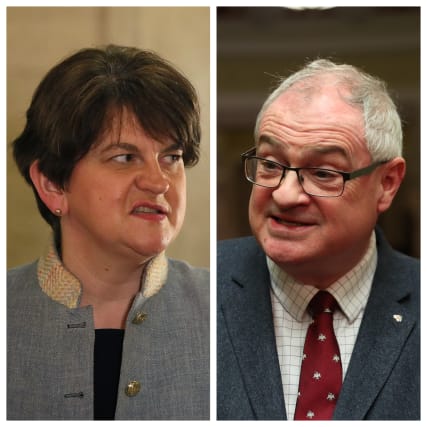 The leaders of Northern Ireland’s main unionist parties have given contrasting reactions to the idea of building a tunnel to Scotland.

First Minister and Democratic Unionist leader Arlene Foster described the suggestion as “positive” while Ulster Unionist leader Steve Aiken insisted the tens of billions that would be required would be better spent on other more pressing concerns in the region.

The politicians were asked to respond to comments from Scottish Secretary Alister Jack, who on Thursday said he favoured a tunnel rather than a bridge as a way to link the two nations.

Mr Jack told a parliamentary committee in Scotland that Boris Johnson is “on the same page” as him, despite the Prime Minister having previously strongly advocated for a bridge.

Critics have raised multiple concerns about the practicalities of building any sort of road link between Scotland and Northern Ireland, insisting the idea is just not realistic.

As well as the major costs, which are estimated at between £20 and £30 billion, there is a huge Second World War munitions dump at the bottom of Beaufort’s Dyke in the Irish Sea.

Mr Jack said the munitions dump would not be an issue with a tunnel and said he had been told by a number of engineers going underground would cost less than building a bridge.

Reacting at Stormont on Friday, Mrs Foster said the importance of connecting Northern Ireland to the rest of the United Kingdom had been demonstrated by the collapse of Flybe and the loss of several key routes from Belfast City Airport to Great Britain.

“This is about connections,” she said.

“I think it is important that we do have those connections. We have seen during the week how we can be disconnected by what happened to Flybe.

“If we look at a feasibility study about a bridge or a tunnel I think those are positive things to look at.”

On the prospect of a tunnel, she added: “It wouldn’t be impacted by the weather or indeed Beaufort’s Dyke either I think as well. We await to see what the Government comes forward with.”

Mr Aiken was more sceptical about the proposal.

“I would like to fly on a direct flight out of Belfast City Airport to either Edinburgh and Glasgow and I think that’s the priority at the minute,” he said.

“And if we can miraculously find £20 billion or £30 billion for a tunnel under the Irish Sea I’d much rather spend it on sorting out our water infrastructure, our health system, our own roads, our power grid and getting ourselves ready for the challenge of climate change.”