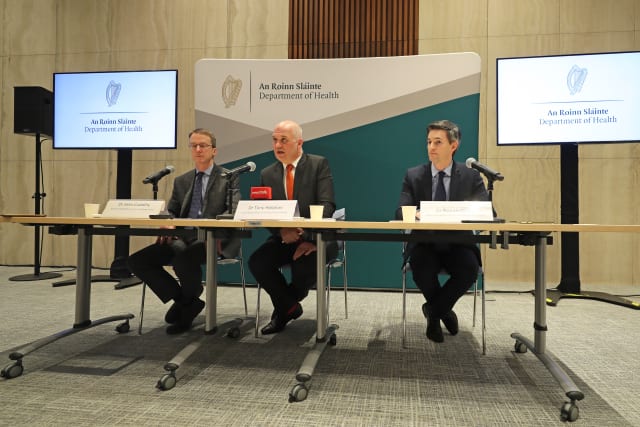 Seven new cases of coronavirus have been detected in Ireland, including one patient who had not travelled to an infected area.

Ireland’s chief medical officer Dr Tony Holohan said the country remains in the containment phase, but warned it is a “rapidly evolving situation”.

Four of the latest cases are travel related from northern Italy, involving four males from the east of the country.

Two are associated with close contact with a confirmed case and involve two females in the west of the country.

The seventh case is a male, who the Department of Health have described as being “associated with Cork University Hospital” and is the first case of community transmission.

A risk assessment is under way at the hospital.

“Public health doctors are working hard to ensure our containment measures are operating effectively,” he said.

“Most people who become infected with Covid-19 experience a mild illness and recover, but it can be more severe for some.

“However, this will need a national effort. Every individual needs to be aware of how to protect their own health and the health of others.

“The most important way they can do this is by following public health advice. Central to this are the protective measures we can all take against Covid-19.”

Earlier, Health Service Executive chief executive officer Paul Reid told a press briefing the health service was preparing for further phases as there has been sustained transmission of the disease in other European countries.

Mr Reid said: “We must ensure that there is not a level of panic among the public but we also must warn against complacency.

“We need the public to act and to treat this seriously and to act on all of the advice that we are giving.

“We are still in a containment phase but our experience has shown that this does move quickly to a further phase and we need the public to heed our advice we are giving.”

Health Minister Simon Harris has said schools or businesses should not close unless they are told to do so by health officials.

Mr Harris said new cases will impact on schools in a variety of ways, and he added that contact tracing on the new cases is ongoing.

He said schools need to follow the advice of health authorities and it was important that schools did not act unilaterally.

“There will not be a one size fits all solution for all schools as this situation unfolds,” he said.

“Those schools need to follow the advice of the public health authorities. There may be different scenarios for different schools and this may happen to a number of schools in the coming days and weeks. It may mean that an event in the school would have to be cancelled.

“It is really important that schools do not act unilaterally and that schools take the opportunity to hear from the public health authorities.”

He said people who are generally healthy do not need to be unduly concerned about the spread of Covid-19.

Mr Harris added: “I don’t want people to be unduly concerned about this, particularly for those of us who are generally healthy and well.

“Getting a virus can be an unpleasant experience and it can require that you stay at home and be self-isolated but most people recover very well from this.”

There are now 13 confirmed Covid-19 cases in the Republic of Ireland, as well as three in Northern Ireland – bringing the total number of cases on the island to 16.