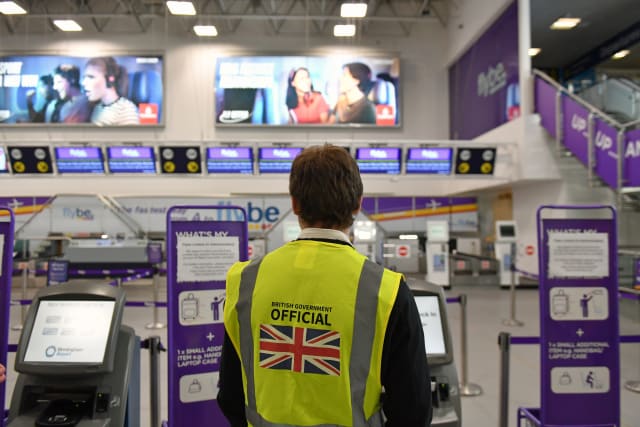 Loganair is to take on 16 routes flown by the collapsed airline Flybe and hire some of its staff.

Scotland’s regional airline will be adding close to 400 new flights each week and has opened a recruitment line for former Flybe employees.

The 16 routes will run from existing Loganair base airports at Aberdeen, Edinburgh, Glasgow, Inverness and Newcastle and will be launched over the next four months, beginning March 16.

Loganair will be recruiting pilots, cabin crew and engineers and expects to create 100 new positions at its four locations, prioritising applications from former Flybe staff.

Dozens of flights were cancelled at Scottish airports on Thursday as a result of the collapse of Flybe.

Thirty-three flights from Edinburgh Airport to destinations across the UK were axed, along with one flight to Paris, Glasgow Airport saw 12 flights to UK cities cancelled, while services were also scrapped at Aberdeen airport and from Highlands and Islands Airports hubs.

Loganair said that by taking on the routes, it would “help former Flybe ground handling agents and airport operators at locations such as Southampton and Exeter to preserve employment in their businesses”.

Loganair chief executive Jonathan Hinkles said the move is the result of “several weeks of behind-the-scenes contingency planning work”, cautioning that it will not lead to “over-expansion” and is “robust and sustainable”.

He added: “The collapse of a long-standing airline like Flybe marks a desperately sad day, especially for the airline’s dedicated team of employees and for customers facing disruption to their journeys.

“By stepping in quickly with a comprehensive plan, Loganair is aiming to maintain essential air connectivity within the UK regions to keep customers flying, and to offer new employment to former Flybe staff members who are facing an uncertain future today.”

Customers previously booked on Flybe services on the same routes will need to make new bookings.

The Scottish Government said Flybe has around 300 employees at its bases in Edinburgh, Glasgow and Aberdeen and officials have spoken with Loganair.

Transport Secretary Michael Matheson said: “We have this morning contacted administrators Ernst Young, based in Manchester, to offer support to affected staff through our initiative for responding to redundancy situations, Partnership Action for Continuing Employment.

“My officials have spoken with AGS Airports, Edinburgh Airport and Highlands and Islands Airports this morning to discuss how we can best help ensure connectivity is maintained and enhanced.”

The demise of Flybe, Europe’s largest regional airline, was announced in the early hours of Thursday and blamed in part on a drop in demand caused by the coronavirus outbreak.

UK Transport Secretary Grant Shapps said everyone was “gutted” about the news, but added: “We really tried to do everything we could back at the turn of the year.

A spokesman for AGS Airports, which owns and manages Aberdeen, Glasgow and Southampton airports, said: “The loss of Flybe is a devastating blow for the airline’s employees and the tens of thousands of passengers who relied on its routes.

“It unfortunately brings into stark focus the fragility of the UK’s domestic connectivity. Earlier this year the UK Government committed to levelling up all regions of the UK by conducting a review of regional connectivity.

“It’s vital this work is progressed as a matter of urgency and reforming Air Passenger Duty (APD) is part of that review.”

A spokesman for Edinburgh Airport said: “We are sorry that Flybe has gone into administration and ceased operations – our thoughts are with Flybe employees at this difficult time.

“We are assessing the impact on our operations and any passengers due to travel with Flybe should not come to the airport as those flights will not be operating.

“Connectivity across the islands of the UK is crucial for families, business and tourists and it is important that the UK Government works quickly and decisively to maintain the links across the UK.”

A spokesman for Highlands and Islands Airports said: “Our thoughts are with Flybe employees and customers at this time. Eastern Airways has confirmed that flights between Wick John O’Groats and Aberdeen will run as normal. Anyone travelling on this route should contact Eastern Airways if they require more information.”