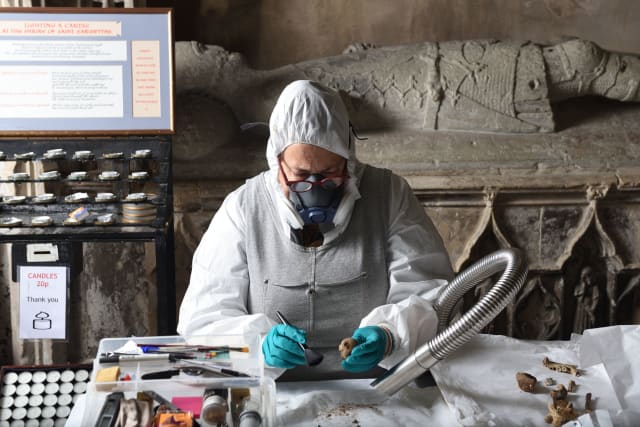 Human remains held at a church in Kent have been confirmed as those of one of the earliest English saints in a "stunning result of national importance".

Bones dating back to around the seventh century are almost certainly those of St Eanswythe, a Kentish Royal Saint and who was the daughter and granddaughter of Anglo-Saxon kings.

The relics survived the upheavals of the Reformation, squirrelled away in a wall, and were discovered in 1885.

The patron saint of Folkestone, Eanswythe is believed to have founded one of the earliest monastic communities in England, most likely around AD 660 on the Bayle – the overlooked historic centre of the town.

She is thought to have died in her late teens or early 20s – though currently the cause of her death is unknown.

Now more than 1,300 years after her death, Kent archaeologists and historians, working with Queen's University in Belfast, have confirmed that human remains kept at the Church of St Mary and St Eanswythe Folkestone are almost certainly those of the saint.

The findings have been hailed as bringing the town's "forgotten history back to the surface".

The remarkable discovery was revealed at a special event at the church on Friday evening to mark the start of British Science Week 2020.

"It now looks highly probable that we have the only surviving remains of a member of the Kentish royal house, and of one of the earliest Anglo-Saxon saints."

Tooth and bone samples were carbon dated and the results pointed to a high probability of a mid-seventh century death date.

The relics mark a period that saw the very beginning of Christianity in England – and signify a continuous Christian witness in Folkestone that stretches from her life to the present day.

Her grandfather King Ethelbert was the first English king to convert to Christianity under Augustine.

Eanswythe's remains might well have been destroyed in the Reformation – along with those of her contemporaries – had they not been concealed in the north wall of the Folkestone church.

Dr Richardson added: "There is more work to be done to realise the full potential of this discovery.

"But certainly the project represents a wonderful conjunction not only of archaeology and history, but also of a continuous living faith tradition at Folkestone from the mid-seventh century down to the present day."

The remarkable discovery represents the conjunction of two projects: The Finding Eanswythe Project and Folkestone Museum.

The project has been locally led and run, with many of the specialists and team involved originating from Folkestone or East Kent. The team has been supported by a large number of local colleagues and volunteers.

It was funded by the National Lottery Heritage Fund.

The Revd Dr Lesley Hardy, director of the Finding Eanswythe project, said: "As you walk through the streets of Folkestone, you are walking, layer upon layer, over ancient history that is now largely hidden from view.

"Finding Eanswythe was about bringing that forgotten history back to the surface."

Reflecting on the spiritual significance of this find, the Revd Dr John Walker of St Mary & St Eanswythe Church said: "St Eanswythe's life vibrates with prayerfulness, compassion and openness to the needs and contribution of others.

"Her presence with us calls us to embody these qualities too."

The project now needs to raise funds for the next stage of work, which will reveal more about Eanswythe and to ensure that her remains are housed properly for the future and can be securely displayed for research and tourism purposes.

The next analytical steps will include stable isotope analysis and DNA analysis.

"This discovery just goes to show the incredible heritage and untold stories still waiting to be revealed and the role National Lottery players have in writing them into our nation's history."