Passengers and staff speak of shock at FlyBe collapse 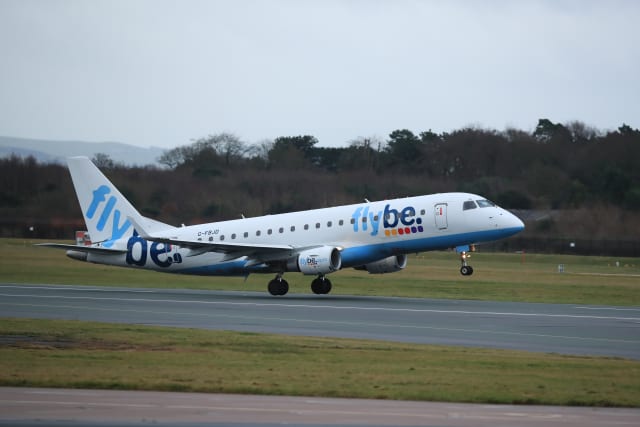 Passengers and staff have spoken of their shock and devastation at the collapse of FlyBe.

Europe’s largest regional airline, based in Exeter, Devon, announced that it had gone into administration on Thursday.

The carrier, which blamed in part a drop in demand caused by the coronavirus outbreak, urged customers not to travel to airports.

Many seemed to follow that advice, with check-in areas across the UK appearing empty on Thursday, though some had not heard the news before setting off.

Staff, who received an email confirming the news from chief executive Mark Anderson, tearfully spoke of the collapse.

One man, who asked to remain anonymous, told the PA news agency that he was “still in denial”.

“I’ve not slept all night and am worrying what I’m going to do next. I’m 35 and flown in total 16 years — this is basically all I’ve known,” he said.

“Working for an airline is more than work. You work 24/7, 365 days a year. You sometimes see colleagues more than you see your own family. They in turn become your surrogate family.

“The older ones look out for the younger ones, and I’ve lost count of the numerous surrogate younger siblings. It was a real family affair – mMothers and daughters, husbands and wives.

“So many babies have been born due to the parents meeting at work.”

Katherine Taylor, a member of FlyBe cabin crew, was in tears at Exeter Airport on Thursday morning.

Asked how she had found out about the collapse, she said: “It all started on the internet and on the news last night, but officially we got an email from Mark to tell us it is all over, it is all gone.

“A lot of us have done this job straight out of college, from 18, 19, so we are not really sure what we are going to do.”

Passengers also spoke of their shock at the loss of the firm.

Angela Thornton, from Penzance, arrived at Exeter Airport on Thursday morning to catch her 10.50am flight to Belfast City Airport.

Her phone had run out of battery and she is moving house, so does not have internet access, and had not heard about the collapse.

“I just got here from Penzance, hoping to go to Northern Ireland, only to find out that FlyBe has run into administration,” she said.

“I didn’t know because my phone died and I’ve just moved house so I don’t have internet access.

“I’m just going to have to go back to Penzance now.”

Ms Thornton, who left home at 5.10am to get to the airport in time, travels between England and Northern Island around four times a year to visit family and friends.

“I probably go with FlyBe the most, usually because they are cheaper,” she said.

Their FlyBe flight was cancelled but staff at the airport were able to book them on to a free flight to Jersey with Blue Islands at 4.15pm.

“Initially I booked the ferry from Poole for tomorrow morning but I managed to get on here,” Mr Hornby said.

“They have kindly put us on a Blue Islands flight so we can get there. I feel sorry for all of the people who work for Flybe.”

Coronation Street actor Charlie Lawson posted a video on Twitter, saying the collapse of Flybe is an “extremely bitter blow” for those in Northern Ireland.

“I’ve certainly lost six flights over the next two months.”

Lekan Ojookiji Abasi was due to catch a flight from Belfast to Manchester en route to visit his mother in Nigeria.

He turned up at Belfast City Airport just before 4.30am to be told the operator had ceased flying.

Mr Ojookiji Abasi, who lives in Belfast, said he heard about the airline’s difficulties on TV on Wednesday night but had not realised the enormity of the situation.

“I arrived here at about 4.25am and the whole place was empty,” he said.

“It was a shock, I couldn’t believe it.

“My head is spinning. Since I arrived here I was dazed since I was told that there’s no Flybe anymore. I couldn’t believe it. It’s a serious matter.”