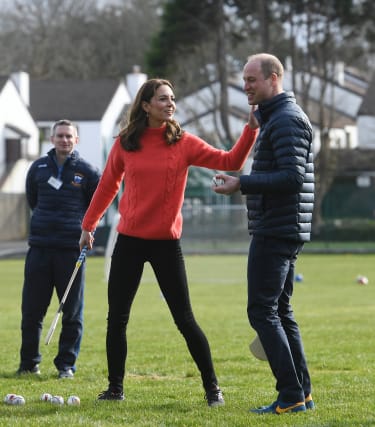 The Duke and Duchess of Cambridge enjoyed the thrills and spills of traditional Irish sports as they joined a group of youngsters on the pitch.

Kate, a schoolgirl hockey player, enthusiastically showed off her skills, while polo-playing William also gamely got stuck in when they tried Gaelic football and hurling in Galway.

The duchess was pictured laughing, covering her mouth in mock horror and celebrating as she attempted to smash the ball past a young hurling goalkeeper.

And in one funny moment, her face was completely covered as she disappeared under her own hair when sprinting across the pitch.

Earlier, William had showed off his juggling skills to the delight of his wife as they celebrated Galway’s year as the European Capital of Culture.

The duke kept three balls in the air with ease, revealing a career in the circus is always an option for the future king.

But when a fourth was added, the gravity-defying display quickly came to an end and, when the balls tumbled to the ground, the couple laughed.

On the pitch of a local Gaelic Athletic Association (GAA) club, the young players made the Gaelic football drill practice look easy – bouncing the ball as they ran and then punting it to the next person.

When the royals joined in, a huge ironic cheer went up from a group of spectators every time William and Kate spilled the ball as they raced across the pitch.

Emily Fallon, eight, who plays as a forward, had punted the ball to William, and said: “It was fun, they’re good but they dropped the ball a lot.”

The couple then tried shooting practice at 10-year-old hurling goalie Fionn Molloy, and as his wife stepped up for her first attempt, William gently teased her, saying: “You’re on camera. No pressure!”

Kate swung and missed twice, when she threw the ball – known as a sliotar in hurling – in the air and tried to hit it with a stick.

But she connected the third time and it flew over the bar – worth one point while under is three.

William had more luck with his hand-eye co-ordination and his first attempt flew high, then the duke and duchess both hit the post and the crossbar before they finally scored.

Hurling coach Carol O’Connell said of the couple’s performance: “It was actually very impressive because it’s not that easy – she started good initially and he had power in his shot.”

Ten-year-old Fionn thought the duchess, a former hockey player, had a future in the game.

He said: “It was cool playing with them, I think Kate was better, she had powerful shots.”

Speaking after the visit, club secretary Conor McGauran said: “Symbolically, it’s a massive deal for us. The royals have never set foot in a GAA club before. They’re doing it in our club in Galway and in Salthill and Knocknacarra today. It’s hugely emotional for us.

“It’s history being made. Plain and simple.

“People have been in Croke Park before but they’ve never been in a GAA club before and I think it’s a massive indication from the royal family about their hopes and intentions to connect even further with the community of Ireland, not just parts of Ireland or the hierarchy.

“This is more than just symbolic, this is them playing our national sport, this is them getting involved in a community-based organisation that’s completely run by volunteerism, so to me it’s a huge message of support for Irish-British relations.”

The royal couple spent the final day of a three-day tour of Ireland in Galway and also visited the city’s Tribeton, a bar and eatery, to learn about acts such as Galway Community Circus and the basketball project Hoops which will be featured in the European Capital of Culture.

William put on his juggling display after the couple watched two performers from the circus, juggler Tony Mahon, 31, from Dublin, and Isabela Mello, 26, from Brazil – now based in Galway – who were “handstanding” for the couple.

The duke, who said he had done “a bit of juggling”, took three balls, and chatting to the reporters in front of the cameras, joked: “I’ll try this in front of a load of you and flashing cameras, ha, here goes.”

He kept the balls in the air for around 15 seconds, before deciding to “up the stakes” with a fourth ball – at which point he managed around two juggles before they came tumbling down.

“Ha. I think I’ll just stick with three,” he said.

Mr Mahon, who has been juggling for 14 years, said he was “very impressed” with William’s skills, adding: “He really exceeded my expectations. Even trying four balls – that’s next level stuff.”