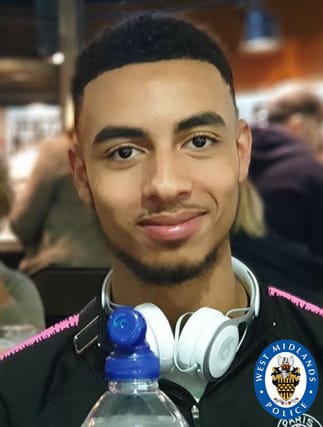 A judge’s voice caught with emotion as he praised the quiet “dignity” of a young murder victim’s family – after jailing the man’s killers for life.

Would-be firefighter, James Teer, 20, was playing with friends when he was shot dead at point-blank range in the street near where he lived.

He died after his two “cold-blooded” killers went cruising the streets looking for revenge over a petty spat at a nightclub four days earlier, in which Mr Teer had acted as “peace-maker”.

Ty Blake, who pulled the trigger, and Sharn Miles, who drove the men to and from the scene, were told by a judge on Thursday that they would serve a minimum of 32 years in prison for the “brutal” attack.

Spotting Mr Teer, Miles pulled up and called him over, as he was play-fighting with friends in Goosemoor Lane, Birmingham, on August 8, last year.

Unsuspecting Teer, who had just returned from the gym, went to the driver’s side window where Blake, sitting in the passenger seat, unloaded both barrels into his head.

Sentencing both men at Birmingham Crown Court, Mr Justice Martin Spencer likened the shooting of the “handsome and well-loved” victim to an “execution”.

He said: “This was a cold-blooded killing, carried out clinically and mercilessly, planned well in advance, in revenge for a perceived slight which offended your arrogant self-esteem.”

In a victim impact statement read to court, Mr Teer’s mother Jacqueline Brown said one moment their son had been “laughing and joking”, looking forward to his first lads’ holiday and 21st birthday, the next she was looking at him lying in the road, covered by a blanket.

“I asked to see him but was told I could not see his face – I had to identify him by his tracksuit trousers and trainers,” she added.

“We will never forget that day, the day our life ended.”

One of his last social media posts read “a smile a day keeps the haters away”.

The judge’s voice caught with emotion as he praised Mr Teer’s family for their calm, quiet “dignity” through the “harrowing evidence” during trial.

“You have my admiration for the way you have conducted yourselves and borne your ordeal,” he said.

“Nothing that has happened in the course of this trial can, I am afraid, bring James back.

“But you’ve seen some justice done and I leave you with my sympathies and the sympathies of all those involved.”

The judge said it was a cruel irony that Mr Teer’s “live and let live attitude” was the polar opposite of his killers’.

He described how “immature” Miles became “incensed” after an altercation at a club four nights beforehand, with a group that included Mr Teer.

“The altercation was not even primarily with James Teer – you said he was trying to be a peace-maker,” the judge said.

Miles then recruited Blake to his cause, shooting Mr Teer and leaving him in the street.

Afterwards, remorseless Blake, 19, and 20-year-old Miles, both from Birmingham, then got rid of the gun, before casually strolling to a fast food restaurant.

CCTV showed the men ordering food, with Blake recorded holding a tissue to his lip which had been cut by the gun’s powerful recoil.

The men had used a high-performance BMW in the killing, stolen off the driveway of a home in Leicestershire hours before the attack.

The judge told them: “The plan was to go out and steal a car, use that to get your revenge by shooting one of the group from the car, and then sell the car and split the proceeds.”

He told Blake: “You got £550, that was how cheaply you valued the life of James Teer, a life that was so dear to his family and friends.”

He added the pair had been “intent on murder”, armed with a sawn-off shotgun, while Mr Teer had been “in the wrong place at the wrong time” play-fighting with a friend.

At their trial, both men accepted being in the car during the shooting, but each said the other had pulled the trigger.

But jurors unanimously convicted Blake and Miles of murder, on Wednesday, also finding Blake guilty of theft and burglary, after stealing the car.

Miles, of Gowan Road, Alum Rock, Birmingham, and Blake, of Shustoke Road, Shard End, simply stared at the ground as the sentences were read out to a packed public gallery