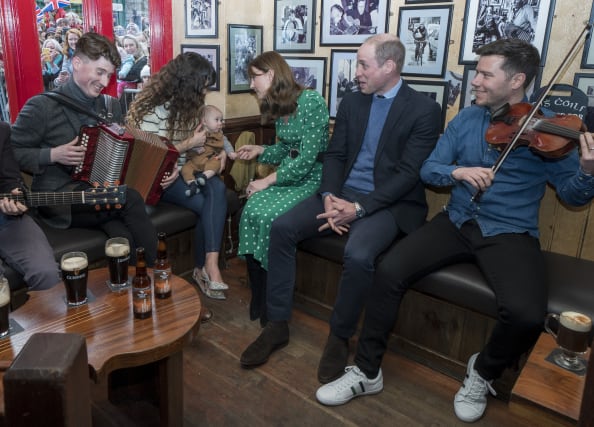 The Duke of Cambridge jokingly apologised to his wife for talking football in the pub when the couple sat in on a traditional Irish music session in Galway.

When William met a fellow Aston Villa fan, he could not resist chatting about the fortunes of their team who are struggling in the Premier league and recently lost to Manchester City in the Carabao Cup final.

The couple were visiting the Galway tavern Tig Coili to sample Irish pub culture, and the duke made a beeline for Colm O’Flaherty, a son of the pub owner, when told he was another claret and blue supporter.

But not before turning to Kate and saying: “Sorry.”

Colm, 36, said: “He asked me if Villa were going to stay up, and I wasn’t sure how to answer. I’m not too confident. I don’t think he was too sure either. We live in hope, as they say.”

When the couple first arrived, they were given a bottle of Midleton whiskey from Cork and two engraved tumblers by pub owner Colie O’Flaherty and his son Aonghus.

Noticing that the label described it as “very rare” – and tactfully overlooking the fact that the whiskey was spelt differently to his wife’s maiden name – the duke turned to the duchess and joked: “Very rare. One in a million.”

Inside, after meeting volunteers who have won awards for their work in the community, they joined a group of musicians, including fiddle player Ronan O’Flaherty, 34, another of the landlord’s sons.

As William chatted with Ronan while he played, Kate was entranced by his three-month-old son Danann, who was sitting on the lap of his French mother, Lassa, 30, and held the baby’s hand.

Lassa said: “We chatted about the music, and the fact that Danann is going to grow older surrounded by Irish music. I asked if they were having a great trip, and she said they were really enjoying it.

“They noticed all the Guinness on the table, and they asked if we always had it that early.”

As they got up from the session, one of the onlookers suggested to William that next time he could join in.

Hundreds of well-wishers had gathered in Galway city centre to greet the couple, as their three-day tour of Ireland came to an end, and they went on a walkabout shaking hands after the pub visit.

The conversation turned once more to football when William heard Cillian Deeley, eight, shout out “Up Villa.”

William walked over and told him: “You’ve made my day. Can I have a hug?”

After the hug William, asked Cillian, from Sligo, if he supported any other team.

On being told Manchester United, he said: “Be careful.”

The couple also came across Tom Prenderville, 11, who, with his floppy blond hair, bore a striking resemblance to their son Prince George, six.

Joan Coughlan, deputy principal of St Patrick’s primary school, said when Kate was told this: “She bent down and looked into his eyes, and said, ‘You know what, you do. But you have brown eyes – George has blue.’

“Then William came along and said, ‘You do – there is a resemblance’.”