Dozens of flights axed from Scottish airports after Flybe collapse 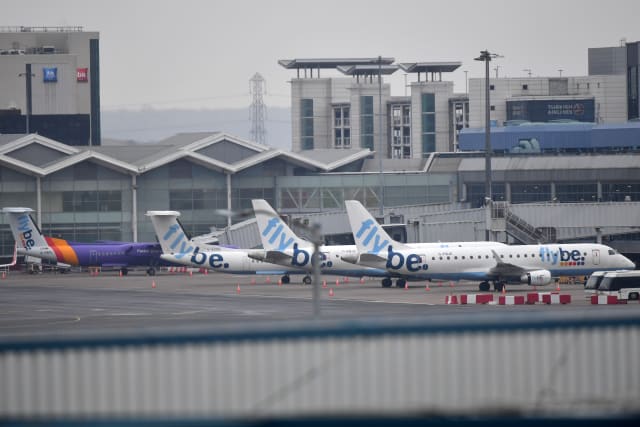 Dozens of flights have been cancelled at Scottish airports as a result of the collapse of Flybe.

The operators of Glasgow and Aberdeen airports urged the UK Government to urgently review its commitment to the regions and reform Air Passenger Duty after the airline collapsed into administration, threatening thousands of jobs.

Thirty-three flights from Edinburgh Airport to destinations across the UK have been cancelled, along with one flight to Paris, Glasgow Airport has seen 12 flights to UK cities cancelled, while services have also been scrapped at Aberdeen airport and from Highlands and Islands Airports hubs.

The demise of Flybe, Europe’s largest regional airline, was announced in the early hours of Thursday and blamed in part on a drop in demand caused by the coronavirus outbreak.

UK Transport Secretary Grant Shapps said everyone was “gutted” about the news, but added: “We really tried to do everything we could back at the turn of the year.

A spokesman for AGS Airports, which owns and manages Aberdeen, Glasgow and Southampton airports, said: “The loss of Flybe is a devastating blow for the airline’s employees and the tens of thousands of passengers who relied on its routes.

“It unfortunately brings into stark focus the fragility of the UK’s domestic connectivity. Earlier this year the UK Government committed to levelling up all regions of the UK by conducting a review of regional connectivity.

“It’s vital this work is progressed as a matter of urgency and reforming Air Passenger Duty (APD) is part of that review.

“We are already speaking to other airlines about backfilling the routes operated by Flybe for which there is clear demand.

“In the meantime, the advice to passengers who were scheduled to travel with Flybe is not to travel to the airport and to visit the Civil Aviation Authority’s website for further advice at www.caa.co.uk/news.”

A spokesman for Edinburgh Airport said: “We are sorry that Flybe has gone into administration and ceased operations – our thoughts are with Flybe employees at this difficult time.

“We are assessing the impact on our operations and any passengers due to travel with Flybe should not come to the airport as those flights will not be operating.

“Connectivity across the islands of the UK is crucial for families, business and tourists and it is important that the UK Government works quickly and decisively to maintain the links across the UK.”

A spokesman for Highlands and Islands Airports said: “Our thoughts are with Flybe employees and customers at this time. Flybe flights from Inverness to both Belfast City Airport and Birmingham Airport are no longer operating. Anyone with a flight booked with Flybe should not travel to the airport and should contact the airline.

“Eastern Airways has confirmed that flights between Wick John O’Groats and Aberdeen will run as normal. Anyone travelling on this route should contact Eastern Airways if they require more information.”

Olympic swimmer Hannah Miley said she frequently used the airline to travel to competitions in England and she was on one of the last flights run by Flybe on Wednesday night, which was subject to a long delay.

She told BBC Radio Scotland’s Good Morning Scotland programme: “I’m quite a regular users so it’s such a shame that it has gone into administration and I do feel for all the staff. They did such an incredible job last night. It’s really sad to see it go.”