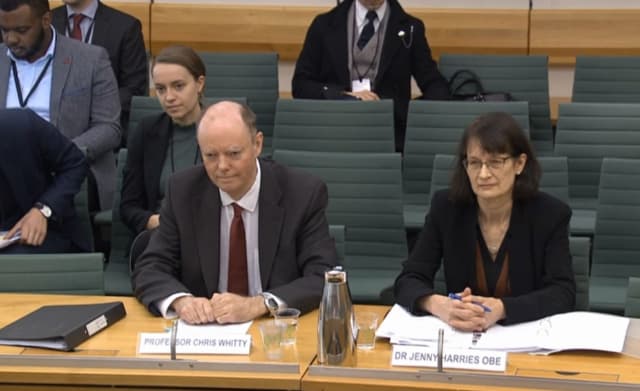 Critical care beds in the NHS could come under intense pressure during a coronavirus epidemic, England’s Chief Medical Officer has warned, as he told MPs the UK has now mainly moved into the “delay phase” of tackling the virus.

Professor Chris Whitty acknowledged that people needing oxygen would stretch the health service, and said some “things may be considerably less well done” during the peak of an epidemic.

But he said the effect could be anything from “a rather bad winter for the NHS”, through to huge numbers where not everyone could be found a bed.

Half of all coronavirus cases in the UK are most likely to occur in just a three-week period, with 95% of them over a nine-week period, he said.

Prof Whitty was giving evidence to the Health and Social Care Committee, with MPs including former health secretary Jeremy Hunt, as the UK announced its 90th coronavirus case.

He said the NHS is “incredibly good at flexing” to meet the demands put on it but acknowledged that, at a peak, “things may be considerably less well done than we would hope for a short but definable period of time”.

Prof Whitty said he had a “reasonably high degree of confidence” that 1% is at the “upper limit” of the mortality rate for coronavirus, although Wuhan in China, which has a weaker health system, had seen an 8% to 9% mortality rate for those aged 80 and over.

Asked if there is enough space in mortuaries to cope with a big increase in deaths, Prof Whitty admitted: “It depends how much worse it gets.

“But there are plans for this. This is standard planning for many emergencies.”

Prof Whitty said the UK has now mainly moved to the delay stage of tackling the virus as evidence of community transmission emerges.

The delay phase means measures can be ramped up to delay its spread, with possibilities including school closures, encouraging greater home working, and reducing the number of large-scale gatherings.

However, Prof Whitty said closing schools would possibly only have a “marginal effect”, adding that children do not appear to be as badly affected by Covid-19 as other groups.

And he told MPs the UK is now “heavily planning” for the mitigation phase.

In other key developments:

– ITV revealed that travel companies are deferring their TV advertising because of the disease, with advertising revenue due to drop 10% in April.

– Europe’s largest regional airline, Flybe, collapsed into administration, with a source telling the PA news agency that coronavirus “made a difficult situation worse”.

– The Grand Princess cruise ship, with around 2,500 passengers and 1,000 crew, is being held off the coast of California after a former passenger died from Covid-19.

– The Department of Health was criticised by experts and the public on Twitter for failing to provide daily updates on the locations of new UK cases.

– England’s Six Nations rugby match against Italy on March 14 in Rome has been postponed due to the coronavirus outbreak.

Prof Whitty told MPs it would be “lucky” to get a vaccine for Covid-19 in the next year, but it would “not get us out of a hole now”.

However, he said other existing treatments may work in high-risk groups although they would not be “perfect”.

Asked by Mr Hunt why the Department of Health was no longer providing daily regional information on the location of new cases, Prof Whitty said: “We had a bit of a communications fumble on this.”

He said the plan was, in the medium term, for the Department to provide “a lot more information with maps and other things” and a “dashboard” of cases.

But he added: “I am not in favour of going down to street level or ‘you’re within 100 metres of a coronavirus (case)’ because I think that is the wrong approach in this country.”

Meanwhile, Prime Minister Boris Johnson sought to reassure the public on ITV’s This Morning, saying it would be “business as usual” for the “overwhelming majority” of people in the UK.

“The scientists have done a very good job of explaining to us what the risks are and they are really quite small. They are appreciable but quite small,” he said.

“People can see that this country is going to get through this in good shape.”

Prof Whitty said elderly people should not self-isolate yet, and neither should those with conditions such as asthma.

He said Covid-19 may trigger asthma but this is the same for other respiratory illnesses, and there is no evidence of a “deep harm” for children with asthma.

And he said pregnant women should not start worrying about coronavirus, but advised any smoker to stop.

Prof Whitty said it takes about five days from getting Covid-19 for symptoms to show, then up to a week to recover.

Those who get more seriously ill tend to do so after about five or six days of having the illness.

Prof Whitty also said there is “no need” for members of the public to stockpile food or medicine.