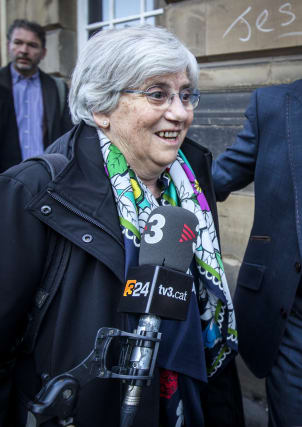 A decision on whether an academic will be extradited to Spain will not be made until the European Parliament has ruled on whether she should remain immune from prosecution, a court has heard.

But Edinburgh Sheriff Court heard on Thursday that the former Catalan minister now has immunity from prosecution in Spain because she recently became an MEP.

Ms Ponsati’s lawyer Gordon Jackson QC told the court the Spanish Government has applied to the European Parliament asking it to waive her immunity so she can be prosecuted.

The court had been expected to centre on the competency of the extradition warrant and issues surrounding dual criminality, which relate to whether the law is an offence in both countries.

But Mr Jackson told the court there was no point discussing matters further until the immunity issue is settled, describing the current situation as a “stalemate”.

He said: “Ms Ponsati is now a member of the European Parliament, that means she has immunity.

“She has immunity from prosecution in Spain and Spain do not dispute that.

“Spain has applied to the European Parliament for waiver of the immunity.

“We’ve agreed that it would make absolutely no sense whatsoever to keep going with this till that immunity issue is sorted.

“We seem to be in a kind of stalemate till that gets sorted.”

Ms Ponsati, a University of St Andrews academic, became an MEP after five seats in the European Parliament were given to Spain when the UK left the EU in January.

Solicitor Advocate John Scott QC, for the Crown, said Spain applied for the waiver in February and it may be around four months before a decision is made.

Sheriff Nigel Ross agreed a full hearing scheduled for May will now no longer take place and the matter will be continued until June 18.

He said: “Nothing will happen today and we will await the outcome of Spain’s application to the European Parliament.”

Ms Ponsati could be sentenced to 15 years behind bars if convicted, with nine other Catalan officials given jail sentences of between nine and 13 years for the same offence in autumn last year.