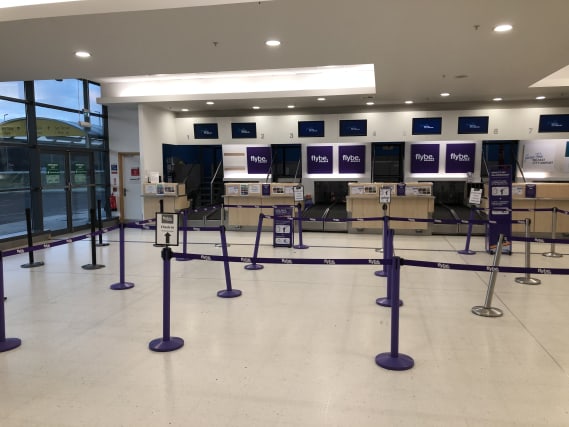 Belfast City Airport is in talks with multiple airlines to fill the routes vacated by Flybe, its chief executive has revealed.

Brian Ambrose insisted there was no threat to the future of the airport and no redundancy plans, despite 77% of its routes being operated by Flybe and two-thirds of its passengers using the administration-hit carrier.

Mr Ambrose told the PA news agency talks had been ongoing with other airlines in recent weeks and some were in contact within hours of the collapse on Wednesday night to set up meetings about taking over the routes.

He said there was interest from operators in all the vacated routes, with multiple airlines vying to take over the busier ones.

Almost all Flybe passengers noted the advice not to turn up to the airport on Thursday morning.

The terminal, which sits beside Belfast harbour, was very quiet throughout the morning, with the Flybe check-in desks empty.

“We have known for some time that Flybe have had difficulty,” he told PA.

“During that time our priority was to support our airline partner but, in parallel, we have been speaking to other airlines. As of now, we have interest in all of the routes.

“Some of the larger routes we have interest from multiple airlines, so I am confident that in the coming days and weeks we will be making announcements on the back-fill of those routes.”

Mr Ambrose said coronavirus may complicate efforts to get the routes operating again in the short term.

He added: “We can’t be definite (on timelines) but the fact is we have a product for which there is a demand.

“The airport is in the best shape it’s ever been in physically, we’ve got the location and airlines even last night were on to us and have been setting up meetings today to discuss how quickly they can back-fill the gap.”

Mr Ambrose said there were no plans for any redundancies at Belfast City Airport.

“Two-thirds of our passengers are with Flybe, so it does leave a significant hole,” he said.

“Coincidentally I was in London yesterday with our owners. They have been fully briefed last night on the situation and they are fully supportive of the airport to help us recover the position and get back to the size we were, or greater.

“We have survived airline collapses in the past and the secret is we have a product that there is a demand for, we have a profitable business, we are in a strong financial position – that’s what gives us the confidence going forward.”

Mr Ambrose said Wednesday had been a difficult night, as Flybe crews landed to discover their employer had gone bust.

“Our immediate feelings are with the staff of Flybe and our customers,” he said.

“It’s been a long relationship with Flybe, they are wonderful people.

“We were meeting a lot of them coming off shift last night to discover they had lost their jobs, so our commitment to them is to rebuild this business and, as we do so, hopefully there will be opportunities for them with other airlines as we get the business back to where it should be.”

He added: “The engineers when they came off shift and came in to see us and then came back and said ‘let us know if there’s anything we can do to help’.

“These are people who are going home to inform their families they had lost their jobs and their first thought seems to be if anything needs to be done this morning and last night, they are there to help us. They are the kind of people that any airline would be privileged to have working for them.”

“Maintaining air connectivity is absolutely vital to Northern Ireland – to enable access to the economic market in Great Britain and for tourists arriving to our airports from Great Britain and beyond,” she said.

Mrs Dodds said she would continue to lobby Government ministers to highlight the need to restore routes to and from the airport.

“The regional connectivity that Flybe offered was vitally important to tourism and our wider hospitality sector here, without it there will be a huge impact on visitor access,” he said.

“The knock-on effect of fewer visitors and tourists means that this sounds alarm for our pubs, restaurants and hotels at a time when coronavirus is compounding the sector’s problems.

“Great Britain is our largest tourism market and without that regional connectivity, the hospitality sector is going to take a real hammering.”