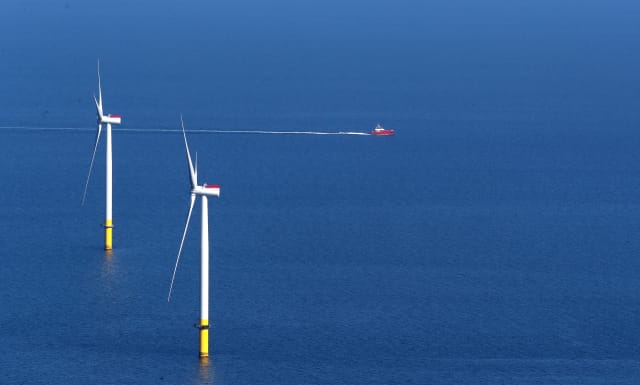 A £2 million competition has been launched to develop new technology to ensure future wind farms do not affect the UK’s air defence radar systems.

It is hoped ways can be found to alleviate the impact that offshore wind turbines in particular could have on military and civilian radar systems.

The Ministry of Defence (MoD) has objected to a number of new wind farm developments over concerns that they interfere with radar systems’ abilities to detect aircraft – as the action of the turning blades can mimic planes.

It is a particular problem with the development of large offshore wind farms in the North Sea and off the east coast of Britain, where they could interfere with systems that protect against a potential air threat to the country.

Solving the issue could help boost growth in the UK’s renewable energy sector while keeping the skies safe, the Government said.

The scheme is being led by the MoD’s innovation hub, the Defence and Security Accelerator (Dasa), working on behalf of the Department for Business, Energy and Industrial Strategy (BEIS), the Royal Air Force, and the Defence Science and Technology Laboratory (Dstl).

It is expected that multiple proposals will be funded with the initial pot of £2 million.

Offshore wind has boomed in the UK in recent years, with major new schemes in the seas around the country, and prices for electricity from schemes tumbling to around £40 per megawatt hour in the latest auctions for power contracts.

The Government has drawn up a sector deal with the industry which will see a huge scaling up of deployment from around 8GW in 2019 to 30GW in 2030 – and as much as 40GW according to its manifesto pledge.

Wing Commander Helena Ramsden, Air Capability Development, Air Command, said: “We are investing in cutting-edge innovation and harnessing the best technology from the brightest minds in the country.

“This competition demonstrates our commitment to keeping the skies above the UK safe from aerial threats whilst accelerating crucial work to allow the nation to do more to combat climate change.”

Dasa delivery manager Adam Moore said:  “Crucial innovation like this is vital if we are to meet our renewable energy targets.

“This competition will not only help us meet our green energy needs but it will help boost UK prosperity, entrepreneurs and innovators by investing in their game-changing technology.”

Defence Minister Jeremy Quin said: “Defence technologies have a huge amount to offer the demands of the 21st century UK – including addressing the challenge of climate change.

“We have an incredible skills base in the UK and this initiative will harness the power of wind turbines whilst ensuring our air defence standards.”