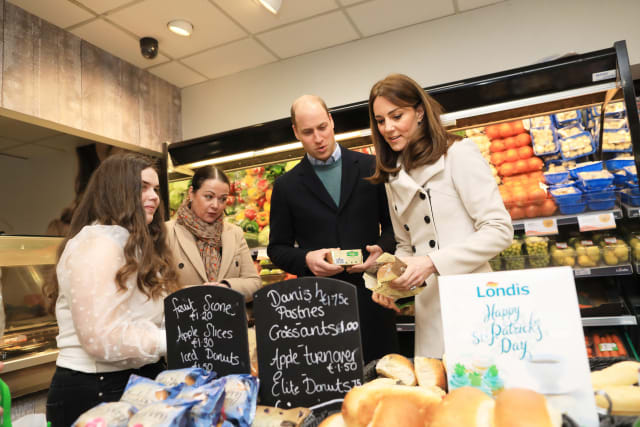 The Duke and Duchess of Cambridge helped prepare the dish of the day for a group of youngsters in Ireland – after popping to a shop to teach the children about budgeting.

William and Kate joined 13-year-olds Simon and Molly to visit a village shop to buy ingredients for vegetable soup.

Their trip to the Londis store in Prosperous, County Kildare, was supposed to be a secret but by the time they got there around 200 villagers had gathered outside to see them.

William stopped to take a selfie with Jennifer Malone, who gave him a bunch of daffodils for his wife.

Before they set off, the Cambridges inspected the fridge with the youngsters and checked the ingredients needed for the soup – all designed to teach the children life skills.

William said: “There’s only one leek. Do we have to stick to the menu?”

He then told the others in the kitchen: “We’re going to shop for you. We’ll be back in a minute. We’ll bring back all the wrong ingredients.”

The couple, who had 20 euro (£17) to spend, returned 15 minutes later with a bag of provisions including brown bread, butter and leeks.

After washing their hands, they donned aprons to help Simon and Molly, and Owen, 13, and Chloe, 15, prepare the meal for around 16 children and relatives.

Later, the couple played a game of table tennis with other young people who are supported by Savannah House, a respite centre run by social justice charity Extern.

The duchess quipped about their cocker spaniel, Lupo: “We try to do this at home but our dog keeps catching the ping pong balls.”

Each year around 300 children from across Ireland stay at the centre in Clane, County Kildare, for a maximum of three nights at a time to have a break from problems at home or while they are in care.

The Cambridges asked the children about whether they cook at home and what food they like.

As they washed and peeled carrots, Kate asked: “Do you cook any vaguely healthy things?”

William asked the boys if they like pancakes, following Shrove Tuesday last week, and added: “I tried to get my children to eat pancakes but they weren’t so interested this year. Maybe next year.”

Before the couple left they sat down with another group of children to help decorate bunting with their own personal messages on what they like about Savannah House.

The exercise was designed to make them take ownership of the centre and help them feel at home on their return visits, often for family therapy.

Extern supports more than 20,000 people per year, including 3,500 children in Ireland and 6,500 in Northern Ireland, affected by issues such as homelessness, drug and alcohol abuse, offending and mental health problems.

Its chief executive Charlie Mack said: “The children we support are truly inspirational and Extern is committed to providing them with the opportunity to discover strengths and abilities they never knew they had.”