What happens if Flybe collapses? 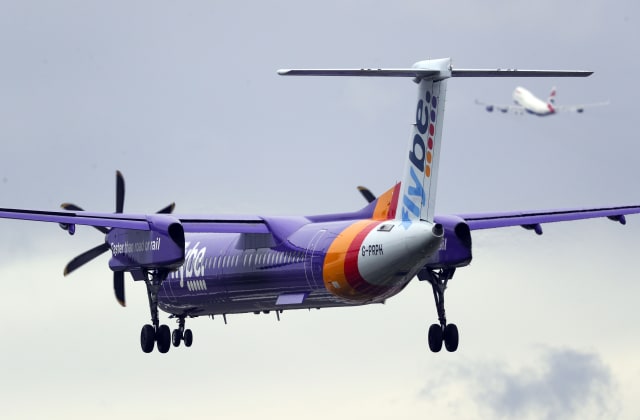 Fears are growing about the future of airline Flybe.

But what will it mean for travellers if the firm collapses?

Flybe is facing fresh doubts over its future after failing to secure a £100 million loan.

The struggling airline was saved from collapse earlier this year but has been unable to obtain the finance from the Government.

– How many people would be affected if it collapses?

Flybe carries about eight million passengers a year between 71 airports across the UK and Europe.

If it collapsed, it could potentially leave thousands of people stranded across the UK and Europe.

The company also has around 2,000 staff who would lose their jobs.

– What would happen to customers already on holiday?

When previous airlines such as Monarch Airlines and Thomas Cook collapsed, the Civil Aviation Authority was ordered by the Department for Transport to launch a major repatriation operation to fly them home.

It is not yet clear whether the Government would order a widespread repatriation of stranded passengers.

– Who would pay for this?

When Monarch Airlines went bust in October 2017, the Government spent £60 million hiring planes to get passengers home while bringing back Thomas Cook passengers has been estimated to have cost even more.

– Will travellers get a refund?

Some travel insurance companies will cover cancelled flights if they are the result of an airline collapse, but not all policies provide this coverage.

Holidaymakers can apply to their credit or debit card provider to be reimbursed.

Flights bought directly from airlines such as Flybe are not generally Atol protected but those bought through a separate travel company may be covered.

– What is the Atol scheme?

– What type of bookings are protected?

The scheme protects most trips booked as a package, such as flights and accommodation, or flights and car hire. It also applies to some flight-only bookings, particularly when the tickets are not received immediately.

– What protection does it offer?

If a business collapses while you are on holiday, the scheme will make sure you can finish your holiday and return home.

Customers who have not yet left home will be given a refund or replacement holiday.