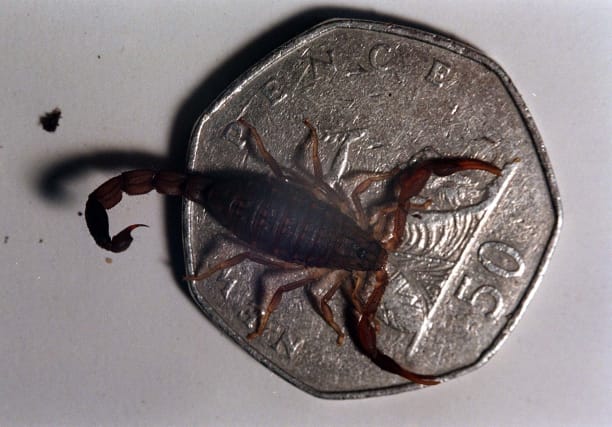 A protein present in scorpion venom could help mitigate the harmful side effects of steroids used to treat arthritis, scientists say.

Researchers in the US have found this protein rapidly accumulates in joint cartilages, including the knees, ankles, hips, shoulders, and spinal discs, when administered on mice.

The team combined these proteins, known as cystine-dense peptides (CDPs), with a steroid normally used to treat rheumatoid arthritis to create a “drug delivery system” that targeted only the joints and not the rest of the body.

They found that this method reversed joint inflammation in the rodents, while avoiding steroid exposure to other parts of the body.

The researchers believe their drug delivery method could be a safer way to treat arthritic diseases, which affect more than 10 million people in the UK.

While steroids are used to treat inflammation that causes arthritis, they come with dangerous side effects, including weakening of the bones, high blood pressure and increased risk of infections, which is why they cannot be administered for long periods of time.

Dr Jim Olson, of the Fred Hutchinson Cancer Research Centre in Seattle, US, and the senior scientist in the project, said: “For people with multi-joint arthritis, the side effects of controlling the disease can be as bad or worse than the disease itself.

“Steroids like to go everywhere in the body except where they’re needed most.

“This is a strategy to improve arthritis relief with minimal systemic side effects.”

The researchers looked at CDPs, a chemically diverse family of proteins found in the venom of scorpions, spiders and snakes.

After analysing 42 CDPs from 20 species, they identified one candidate that accumulated within cartilage tissue in rodents.

The scientists then attached these proteins to triamcinolone acetonide, a steroid treatment for arthritis, and found that it helped concentrate the steroid drug within the cartilage of joints in rats with rheumatoid arthritis.

The treatment was found to reverse inflammation in the joints without damaging tissues in the thymus and spleen, the two organs often affected by repeated steroid treatments.

Researchers say further studies are required to assess the safety of this drug delivery method in animals over longer periods of time before moving on to human clinical trials.

Emily Girard, staff scientist in Dr Olson’s laboratory and one of the study’s lead authors, said: “There is more development to be done, but I hope that this work results in a therapeutic that will help a lot of people.”

The findings are published in the journal Science Translational Medicine.