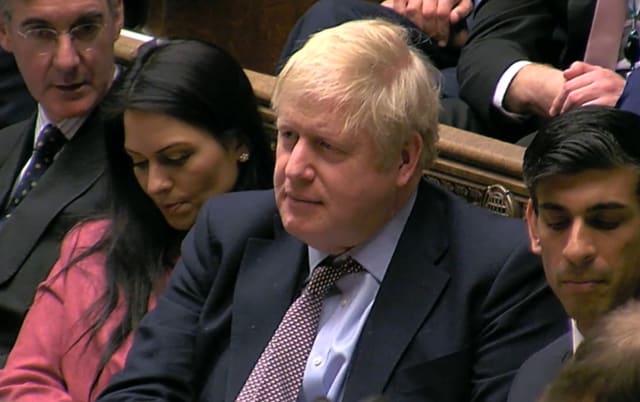 Boris Johnson said he was “sticking by” beleaguered Home Secretary Priti Patel as she faced further allegations about bullying behaviour.

The Cabinet minister is facing claims over her treatment of officials in three separate Government departments during her ministerial career.

Labour said it had received further allegations about Ms Patel’s behaviour as the storm around her alleged conduct intensified.

But at Prime Minister’s Questions, Mr Johnson gave a public show of support for Ms Patel, who was sat on the Commons frontbench alongside him.

The Prime Minister said: “The Home Secretary is doing an outstanding job – delivering change, putting police on the streets, cutting crime and delivering a new immigration system – and I’m sticking by her.”

The claims about Ms Patel’s conduct follow the resignation at the weekend of the top official at the Home Office, Sir Philip Rutnam, who quit accusing her of bullying subordinates.

Sir Philip has now started his claim for constructive dismissal.

“Philip Rutnam has started the legal process in his claim against the Home Office, Cabinet Office and Priti Patel,” Dave Penman, general secretary of the FDA union which represents senior civil servants, said.

Sir Philip is believed to have lodged an initial complaint with the Advisory, Conciliation and Arbitration Service (Acas).

A spokesman for Labour leader Jeremy Corbyn said his party had received fresh allegations about the behaviour of Ms Patel from Government staff in the last 24 hours.

He said staff from the Home Office and other departments had contacted the party with allegations relating to Ms Patel and another former minister.

On Tuesday night it emerged a senior official at the Department for International Development (DfID) had reported a “tsunami” of allegations of abuse by officials in Ms Patel’s private office when she was secretary of state, BBC2’s Newsnight reported.

The DfID allegations come after a former aide at the Department for Work and Pensions was reported to have received a £25,000 payout from the Government, having claimed she was bullied by Ms Patel when she was employment minister.

A spokesman for Ms Patel said: “The Home Secretary categorically denies all of these allegations.”

Newsnight quoted a Tory source as saying there was a “concerted effort” by sections of the Civil Service to undermine Ms Patel and that “dark forces” were trying to influence a Cabinet Office inquiry into her conduct.

The DfID claims relate to the period around 2017 when Ms Patel was sacked by Theresa May as international development secretary over unauthorised contacts with the Israeli government.

Following her dismissal, a senior figure in DfID was said to have approached staff in her private offices about allegations that they had heard of bullying.

The senior figure was said to have been told of multiple claims of staff being humiliated and coming under heavy pressure in emails – similar to the allegations made about Ms Patel’s conduct at the Home Office.

They then went to see another senior figure in DfID and urged them to contact the then cabinet secretary – the late Sir Jeremy Heywood – so that her conduct was recorded “in the system” if she ever returned to government.

Although the person making the claims has not been named, they were said to be prepared to give evidence to the Cabinet Office inquiry currently under way into allegations Ms Patel broke the ministerial code.

The individual concerned was also said to be ready to give evidence in support of Sir Philip if his case goes to an industrial tribunal.

At Prime Minister’s Questions, Mr Corbyn and Mr Johnson clashed over the nature of the inquiry into Ms Patel.

The Labour leader said Mr Johnson has “no shame in defending bullying” in his Government as he called for an “independent” investigation.