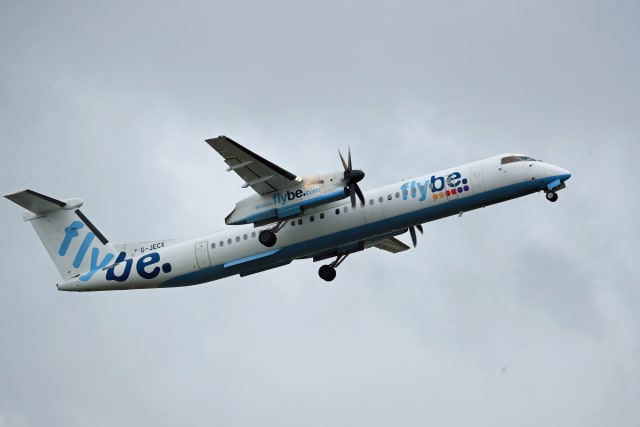 Airline Flybe has collapsed into administration after ongoing concerns about its finances and despite a government bailout.

Here is a timeline of the airline’s difficulties since November 2018.

Following falling demand and a £29 million loss from rising fuel costs and the weak pound, Flybe puts itself up for sale.

The Exeter-based carrier engages in talks with a number of “strategic operators” about a potential sale.

It hires investment banking advisory firm, Evercore, to help with the review and sale process.

Flybe is purchased by Virgin Atlantic and Stobart Group, in conjunction with Cyrus Capital Partners, for £2.2 million.

The companies agree to pay just 1p per share and the airline is combined with Stobart Air in a joint venture called Connect Airways.

The planned takeover is overhauled after Flybe fails to meet crucial financing terms.

The carrier says it failed to meet the conditions for receiving a promised £20 million bridge loan as credit card banks clamped down amid fears over its financial security.

Flybe reports it has received the first £10 million in crucial funding as part of its takeover amid shareholder unrest over the deal.

Despite its shares almost doubling due to the “highly conditional” approaches Flybe continues to back the existing takeover by the Connect Airways consortium.

Dozens of Flybe flights are cancelled and the airline announces it will stop flying jets from four airports.

Christine Ourmieres-Widener announces she will step down from her role as chief executive of Flybe Limited in July.

Flybe is rebranded to Virgin Connect after the completion of its sale to Connect Airways.

A government report reveals that the airline is at risk of collapse after further losses, endangering around 2,000 jobs.

A collapse is averted after the Government says it will review air passenger duty (APD) and shareholders agreed to inject additional investment.

Ryanair owner Michael O’Leary also writes to the government asking it to explain the decision and threatens legal action.

Flybe confirms that it agreed a financial arrangement to defer tax payments of “less than £10 million” with HM Revenue and Customs.

It is understood that the airline was allowed to defer its monthly air passenger duty (APD), which is paid by customers and collected by airlines to then be passed on to HMRC.

Unions express fears that the airline is again on the verge of administration, threatening thousands of jobs and the future of a number of regional airports.

Crisis talks are held to try to secure a rescue package, but no deal is agreed.

Flybe announces it has ceased trading with immediate effect, with all flights grounded an administrators appointed.