Flybe becomes latest in string of major airlines to collapse 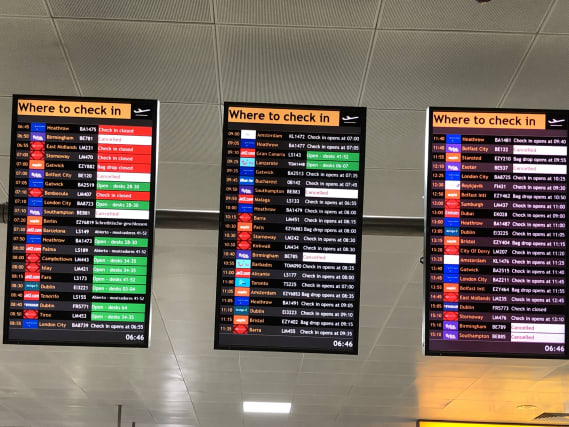 Flybe is the latest in a number of airlines to have collapsed in recent years due to financial problems.

Around 2,000 jobs have been put at risk after a bid for fresh financial support failed – and it comes just six months after Thomas Cook went bust.

Here we take a look at how some of the biggest names in the industry have failed:

Cabin crews were left stranded and out of work by the sudden collapse which was caused by heavy losses, the writing-off of aircraft and the inability to secure long-term financing.

In October 2017 Monarch Airlines went into administration after failing to gain a renewal of its Air Travel Organiser’s Licence (Atol) from the Civil Aviation Authority.

Founded in 1967, the company was a major player in the British leisure charter business for decades.

Passengers who were already abroad awaiting a flight home were returned at no cost to them by the British government via 38 planes chartered by the CAA in what was the biggest-ever peacetime repatriation at the time … a record that lasted just two years.

The effort to bring home passengers stranded abroad by Thomas Cook’s collapse was double that of the Monarch operation.

One of the world’s oldest travel agencies, it went into administration on September 23 2019, affectomg 600,000 holidaymakers and 9,000 jobs.

Between 2017 and 2019, the collapsed tour operator had three different finance chiefs as it failed to drive profitability and reduce the company’s significant debt burden.

Icelandic carrier Wow Air shut down after announcing bankruptcy on March 28 2019, cancelling all its flights.

It had offered low fares between Europe and North America via its Icelandic hub near Reykjavik and once advertised flights between London and New York for £99 each way.

Founded in 1987, Flybmi was once the regional arms of British Midland International.

The airline was sold off in 2012 following BMI’s acquisition by British Airways but it shut down in February 2019 due to rising costs and lack of customers.