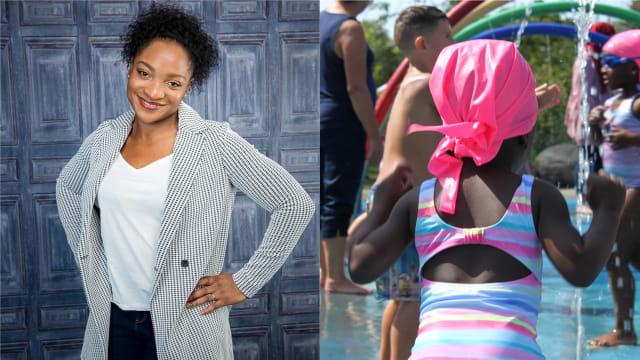 A British inventor has created a waterproof headscarf designed to protect afro hair, in a bid to encourage more black and minority ethnic (BAME) people to go swimming.

Danielle Obe, 38 from London, came up with the idea for Nemes after her daughter, now six, began to dread going in the pool. She herself had previously given up swimming for two decades because she did not want to risk damage to her hair.

The mother-of-two told the PA news agency: “Getting into any type of aquatic activity then was a huge no-no. I couldn’t go swimming in the evening after work. If I did, how would I turn up for client meetings the next morning?

“Kayla hates getting soap in and around her face, so when it came time to wash her hair after swimming, she would scream and scream.

“So one day I promised her we would find a solution, we would work together to create something that protected her hair.”

The pair began experimenting with different caps when swimming — doubling them up and trying out different brands until Ms Obe realised she would need to invent something herself.

She said: “I discovered that swimming caps were originally designed not to protect hair, or keep it from getting wet, but instead to streamline.

“So I couldn’t find something to keep Kayla’s hair dry because the product was flawed to begin with.”

The name Nemes is taken from the pieces of striped headcloth worn by pharaohs in ancient Egypt, with the swimming scarf taking a similar shape. It is available in four designs — the Nerf, the Nubian, the Cleo and the Pharo.

The charity, the first of its kind in the UK, aims to encourage more BAME people to go swimming, after figures from Sport England revealed 95% of black adults and 80% of black children do not go swimming, according to a survey taken over two years.

Under-representation of the BAME community is believed to be in part due to racist stereotypes about the sport.

For many, Ms Obe says, the reason comes down to haircare.

She said: “Natural afro hair grows up and out, not down in length like Caucasian hair.

“So afro hair combed/brushed out could be 10in long and as soon as you get into the water, it shrinks down to 4/5in — looking like you’ve had an instant hair cut. Styling it thereafter is a really long, drawn-out task.

“Aside from the shrinkage, the chlorine dries out the hair, causing it to be frizzy, brittle and ‘thirsty’, which is what causes breakage, hair thinning and – in some cases for women with processed, delicate hair – it falls off if the hair is not thoroughly washed out, conditioned and rehydrated, which is the painstaking process I had to go through with Kayla at the time.”

Afro hair is naturally drier than other hair as it has fewer cell layers which means it does not retain as much moisture.

The swimming scarves are designed for anyone, and to protect all hair types in the water. They are used by her entire family, including three-year-old Eliora and nine-year-old Zachary.

She said: “After I created the design, I began sharing it with people. My aim was to encourage more people to go swimming, but we have also found many people use them in the shower, or to rehydrate their hair.

“The Nemes can be used by everyone, not just BAME people, to swim, steam, spa or shower and protect colour-treated hair in chlorine water so hair colour lasts longer, and most especially designed for afro-Caribbean hair and hairstyles.”

The scarves are available for pre-order and will go on sale in the spring.