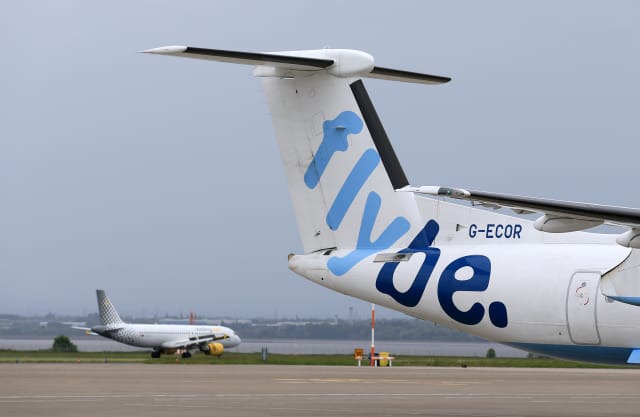 The regional carrier narrowly avoided going bust in January, but has continued to lose money.

A drop in demand caused by the coronavirus “made a difficult situation worse” for Flybe, and it is expected to enter administration overnight, an airline source told PA.

Crisis talks were held throughout the day on Wednesday to try to secure a rescue package, but no deal was agreed.

Flybe’s website has stopped working, with visitors being shown as message stating “This link is no longer live.”

The collapse of the Exeter-based airline will threaten thousands of jobs and the future of a number of regional airports.

Flybe was bought by a consortium of Virgin Atlantic, Stobart Group and Cyrus Capital in February 2019.

In January, Flybe agreed an arrangement to defer tax payments of “less than £10 million” with HM Revenue and Customs, while ministers pledged to review Air Passenger Duty (APD).

The airline has been in discussions with the Government in a bid to obtain a £100 million loan, but the terms could not be agreed.

Flybe serves about 170 European destinations and has a major presence at UK airports such as Aberdeen, Belfast City, Manchester and Southampton, which will be hugely affected by a loss of its business.

It flies the most UK domestic routes between airports outside London.

Mike Clancy, general secretary of the Prospect union, said it would be a “devastating blow” for its members working for Flybe if it goes into administration.

He said: “Prospect will do everything we can to support our members but the truth is the Government has badly let them down.

“The failure to provide the loan that is required as part of a package of rescue measures means the Government has failed in its commitment to every part of the UK.”

Nadine Houghton, national officer of the GMB union, said: “These unfolding developments are a tragedy not only for Flybe’s loyal workforce, but a domino effect now puts 1,400 jobs in the wider supply chain at immediate risk and threatens the future of vital regional airports.

“The last thing regions crying out for investment need is to see infrastructure that maintains good jobs ripped away.”

Shadow transport secretary Andy McDonald said: “The collapse of Flybe is disastrous news for passengers and employees alike and will cause real anxiety in many regions throughout the country.

“The Civil Aviation Authority is sadly very well practised, following the collapse of Monarch and Thomas Cook, at responding to airline failure and looking after passengers. No doubt they will do that once more.”

Rory Boland, editor of Which? Travel magazine, said: “This is a stark reminder for passengers to ensure they have protections such as airline failure insurance, and to book flights with a credit card so that they can reclaim the cost with their card issuer should an airline go bust.”

Flybe aircraft at airports including Edinburgh are not being refuelled and engineers are being laid off, sources told the PA news agency.

There is expected to be a big knock-on effect among airport staff such as baggage handlers.

Unite national officer Oliver Richardson told PA: “Unite members and the entire staff at Flybe will be feeling angry and confused about how and why the airline has been allowed to collapse.

“It is simply outrageous that the Government has not learned the lessons following the collapse of both Monarch and Thomas Cook, that the much promised airline insolvency review has still not materialised.”