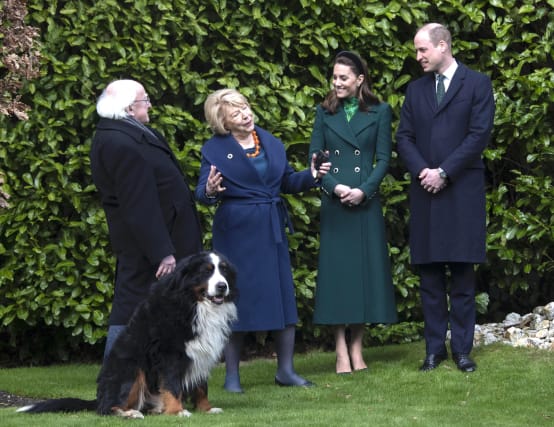 The Duke and Duchess of Cambridge discussed the implications of Brexit with Ireland’s President Michael D Higgins during the first day of their Irish tour.

William and Kate talked about the UK’s decision to leave the EU during a meeting with the head of state and his wife Sabina – after the duke and duchess paid tribute to their hosts by featuring Ireland’s national colour green in their outfits.

The foursome also chatted about building on the foundations of the Good Friday Agreement which ushered in peace in Northern Ireland, said a spokesman for the president.

And in a symbolic gesture, the couple called for a “brighter future” in a handwritten note left with a wreath laid at Dublin’s Garden of Remembrance.

The Cambridges attended a string of formal events during their first official day in Ireland, including meeting Taoiseach Leo Varadkar.

William and Kate paid their respects to Ireland’s fallen heroes at the Garden of Remembrance, dedicated to those who rose up against British rule in 1916 and gave their lives for Irish independence.

At the open space, the Queen broke down barriers during her historic 2011 visit by recognising Ireland’s struggle for self-rule.

The couple’s poignant message read: “May we never forget the lessons of history as we continue to build a brighter future together.”

After the meeting at Aras an Uachtarain, the president’s official residence, a spokesman for Mr Higgins confirmed Brexit was among the topics of conversation.

He said: “The couples discussed the close ties between the people of Ireland and Britain and the importance of continuing and deepening close relations between all of the peoples of these islands.

“President Higgins, Sabina and their royal highnesses spoke of the challenges ahead, including the implications of the UK’s departure from the European Union and the importance of continuing to build on the foundations of the Good Friday Agreement.

“They also discussed the global challenges of climate change and biodiversity loss and the urgent need to revisit the fundamentals of how we organise our economies and societies if we are to tackle these existential threats in a meaningful way.

“The importance of removing obstacles that inhibit young people from building their skills and realising their aspirations for a truly fair and sustainable world, and the particular importance of responding to the vulnerabilities of young people, was among the other topics discussed.”