William and Kate discuss Brexit during visit to Ireland 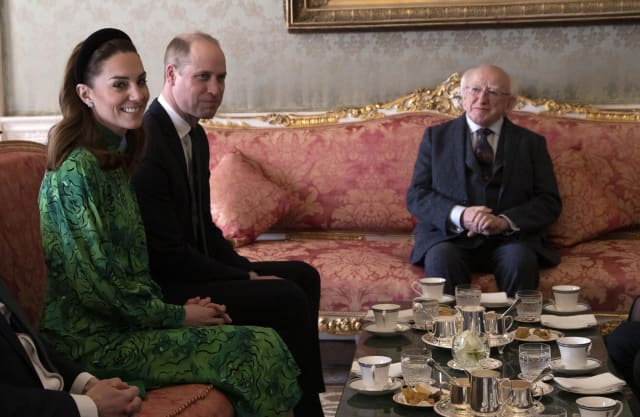 The Duke and Duchess of Cambridge have discussed Brexit and its implications as well as the importance of the Good Friday Agreement during their visit to Ireland.

William and Kate met President Michael D Higgins and his wife Sabina in the royal couple’s first act of diplomacy on their three-day visit to the Republic.

The royal couple toured Aras an Uachtarain – the president’s residence – as official guests of Ireland’s head of state.

The Cambridges joined Mr and Mrs Higgins for a tea party, along with the British ambassador to Ireland, Robin Barnett, and Ireland’s ambassador to Britain, Adrian O’Neill.

They were also joined by Mr Higgins’s adviser Claire Power and his secretary general Art O’Leary.

During their discussions, the royal couple spoke about Brexit and the challenges of climate change.

A spokesman for Mr Higgins said: “The couples discussed the close ties between the people of Ireland and Britain and the importance of continuing and deepening close relations between all of the peoples of these islands.

“President Higgins, Sabina and their Royal Highnesses spoke of the challenges ahead, including the implications of the UK’s departure from the European Union and the importance of continuing to build on the foundations of the Good Friday Agreement.

“They also discussed the global challenges of climate change and biodiversity loss and the urgent need to revisit the fundamentals of how we organise our economies and societies if we are to tackle these existential threats in a meaningful way.

William and Kate were also given a short tour of the gardens, and visited the Peace Bell in the grounds of the Aras.

The president said the bell was unveiled in 2008 by then-president Mary McAleese to mark the 10th anniversary of the Good Friday Agreement.

The bell, dating back to the 19th century, is supported by two oak trunks which came from Shane’s Castle Demesne in Co Antrim and from the Glencairn area in Co Dublin.

One of the president’s dogs, Brod, accompanied them.

The couple’s third engagement of the day was a visit to Government Buildings in Dublin, where they were greeted by Taoiseach Leo Varadkar and his partner Matt Barrett.

The Cambridges were given a brief tour of the building en route to Mr Varadkar’s office, where they were invited to sign the visitor’s book, following in the footsteps of William’s brother-in-law Harry and his wife Meghan in 2018.

As Mr Varadkar translated the book from Irish, William asked: “Would you like an address?”

The Taoiseach quipped: “What’s the postcode for Kensington Palace?”

When Mr Varadkar then lightheartedly asked Mr Barrett if he would like to sign the guest book, he laughed “no”.

The four then sat down for a 25-minute private discussion.

Mr Varadkar later tweeted: “It was a pleasure to welcome the Duke and Duchess of Cambridge to Government Buildings this afternoon as part of their visit to Ireland.”

On Tuesday evening, the couple will enjoy a party at the Guinness Storehouse being hosted by Mr Barnett.