Wendy Craig awarded CBE and vows to keep on working 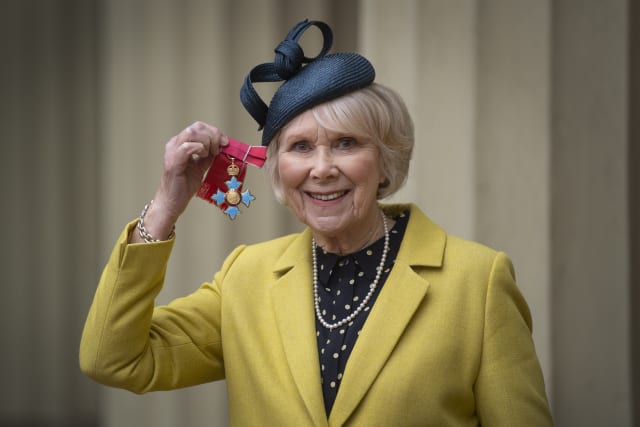 Butterflies star Wendy Craig says at 85 she has no plans to stop working in entertainment as she received her CBE from the Queen.

The great grandmother is best known for her role as Ria Parkinson in the British sitcom which aired on BBC Two from 1978 to 1983.

But her varied career has also seen her perform on stage and appear in shows including the ITV soap Emmerdale and the BBC medical drama Doctors.

On Tuesday, she was presented with a CBE medal from the Queen for her services to drama and charity.

Speaking after the ceremony at Buckingham Palace, Craig said while she is working less than in her younger years, she wanted to “keep on working for as long as I can”.

In 2019, she made an appearance in Doctors alongside Butterflies co-star Bruce Montague.

“I am very good at playing grandmas lately,” she told the PA news agency. “I’d like to play a nice cuddly grandma next.”

Craig said it was “so exciting, so rewarding and so unexpected” to be made a CBE.

“The Queen said to me ‘oh, you’ve been working in drama for quite a long time’, and we had a little chat,” Craig said.

“She was very sweet and pleasant.”

Craig, who lives in Berkshire, south east England, famously played the role of a married mother-of-two in the Butterflies series.

Her housewife character became increasingly dissatisfied with her domestic life in the show, and led to her forming a romantic, but platonic, relationship with a businessman.

She said women today have far more options than her character was portrayed as having in the 70s, adding: “It is a completely different scene. I stayed overnight at my son’s house and his wife goes out to work, and she was getting ready to go to work, and getting the children off to school.

“The women are wonderful the way they manage to do everything and are so accomplished, making sure there is food, cooking the meals and going out to work.”

Norfolk novelist Rose Tremain was also made a dame for her services to writing.

The 76-year-old, from Thorpe St Andrew in Norwich, said: “I feel rather moved by it actually. I think it feels especially good because writers aren’t often given these things.

“A lot of actors get them, I think it is because their visibility is much higher. We tend to hide behind our work.”

Dame Tremain was one of only five female writers to be included in writing magazine Granta’s original list of ’20 Best of Young British Novelists’ in 1983.

Her novels and short stories have been published worldwide in 27 countries, and have won various awards including the Orange Prize for Fiction in 2008 for her book The Road Home.