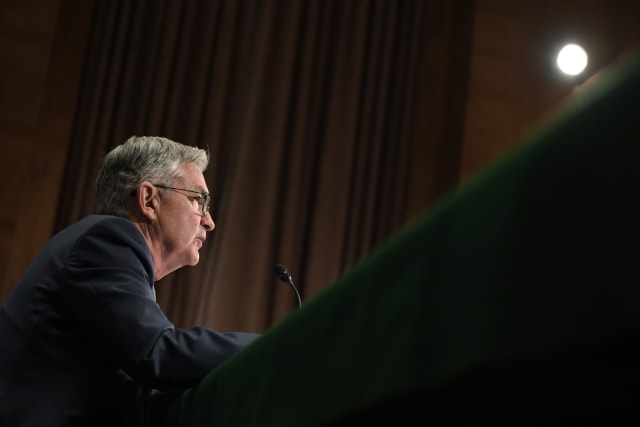 The US Federal Reserve will cut interest rates by half a percentage point in its first emergency rate cut since the Great Recession in response to the spreading coronavirus.

The Fed’s statement also said that it is “closely monitoring developments”.

The Dow, which had fallen sharply after the opening bell, swung almost 700 points into positive territory after the Fed announcement.

The G7 nations had earlier pledged to use “all appropriate tools” to deal with the spreading coronavirus but announced no immediate action.

The group said in a joint statement that it was “ready to take actions, including fiscal measures where appropriate, to aid in the response to the virus and support the economy”.

The statement from the US, UK, Japan, Germany, France, Italy and Canada was issued after an emergency conference call among the finance ministers and central bank presidents, led by US treasury secretary Steven Mnuchin and Mr Powell.

The G7 has issued similar joint statements during periods of extreme market turmoil, such as the September 11 terror attacks in 2001 and the 2008 financial crisis.

Last week, the Dow plunged 14% from recent highs, its worst week since the 2008 global financial crisis.

The G7 nations added: “Given the potential impacts of COVID-19 on global growth, we reaffirm our commitment to use all appropriate policy tools to achieve strong, sustainable growth and safeguard against downside risks.”

Global agencies have indicated this week that there will be a significant economic impact as the virus spreads.

On Monday, the Organisation for Economic Cooperation and Development (OECD) said that the coronavirus, which was first detected in China but has now spread to 60 nations in Europe, the US, Latin America and other parts of Asia, could cause the world economy to shrink this quarter for the first time since the international financial crisis more than a decade ago.

The OECD lowered its forecasts for global growth in 2020 by half a percentage point, to 2.4%, and said the figure could go as low as 1.5% if the outbreak is sustained and widespread. There are signs that the outbreak has begun to ebb in China.

Economists at Capital Economics said on Tuesday it was lowering its US GDP forecast to 1.8% this year, down from a previous 2% with an expectation that the Fed will cut rates by half a percentage-point by mid-year.

In an effort to calm markets that had become turbulent as the virus spread, Mr Powell said on Friday that the Fed will “use our tools” to support the economy, a strong signal that the central bank was prepared to resume interest rate cuts if the US economy is threatened by the spread of the virus.

US president Donald Trump, a frequent critic of the Fed chairman that he appointed, tweeted again on Tuesday that the Fed was not lowering benchmark interest rates fast enough.

The G7 statement was also criticised by many economists for the lack of specifics.

Chris Rupkey, chief financial economist at MUFG in New York, said the G7 statement was “nothing but a statement issued with vague promises”.

Analysts at High Frequency Economics said the statement was “utterly and entirely devoid of action verbs” and offered financial markets “nothing new”.

Jennifer McKeown, head of global economics at Capital Economics said: “The statement falls short of hopes of a coordinated policy response and raises the risk that central banks will disappoint markets’ expectations in the months ahead.”