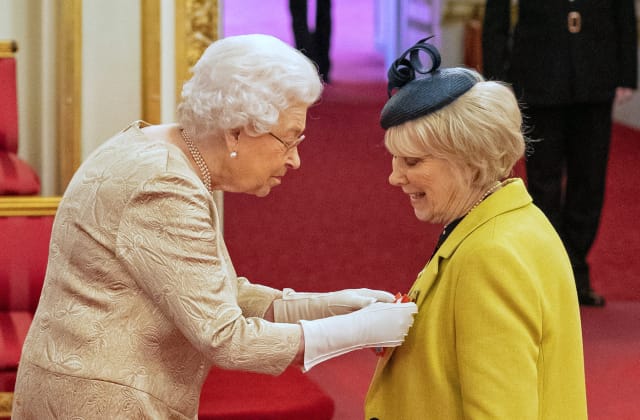 The Queen opted to wear long white gloves as she carried out an investiture at Buckingham Palace.

The palace declined to confirm whether the 93-year-old monarch was taking the precaution because of the coronavirus outbreak.

But the number of people diagnosed with Covid-19 in the UK has risen to 51, and the head of the World Health Organisation has advised people over the age of 60 to avoid crowded areas.

A royal source said the Queen would be following any advice from the Government.

The head of state usually hands out the honours without gloves, as she carries out the fiddly task of fastening the awards to a hook on the recipients' lapels.

The oversized gloves, which stretched past the Queen's wrist, appeared much longer than the ones she usually wears when out and about meeting the public on official engagements.

The Queen is a fan of black or white gloves, but the end of the accessory is usually tucked into the sleeve of her coat or jacket.

Each investiture, held in the palace ballroom, is attended by more than 60 people, receiving a range of accolades, from MBEs to knighthoods and damehoods, plus their guests.

The Queen greets each recipient in turn on the low red dais and shakes their hand.