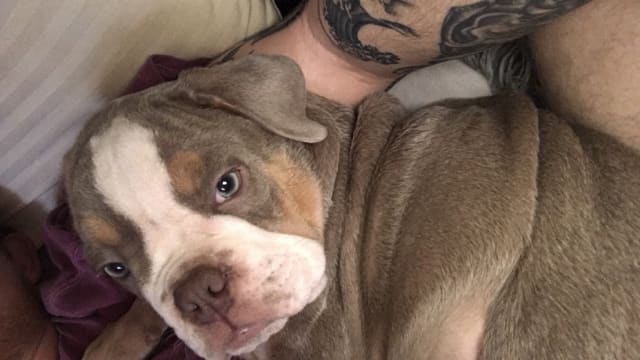 A young puppy was stolen by two men at knifepoint during an armed robbery, police said.

Scotland Yard said the British bulldog puppy named Spot was stolen by two men in Lullingstone Crescent, Orpington, at around 8.50am on Tuesday morning.

Spot and his owner – a man in his early 30s – were approaching the junction with Grovelands Road when two men jumped out of a white Mercedes CLA Sport, the force said.

The driver of the car produced a knife and threatened the victim before stealing the puppy – which is only weeks old – and fleeing in the car.

The Metropolitan Police said that the victim chased the car and the suspects were last seen on the A20 at Fiveways.

Police inquiries reveal the car was last known to be in the Canning Town and Stratford area.

The driver of the car is described as black, aged about 20, with hair in corn rows and a scar on his right cheek. He was wearing a white or cream jacket with black patches on it, with a red outline.

The passenger was also black, aged about 20, with short hair, and was wearing a navy blue jacket with the same patches as the driver.

Police are appealing for anyone who witnessed the robbery, recognises the suspects’ descriptions or has any information on Spot’s whereabouts to come forward.