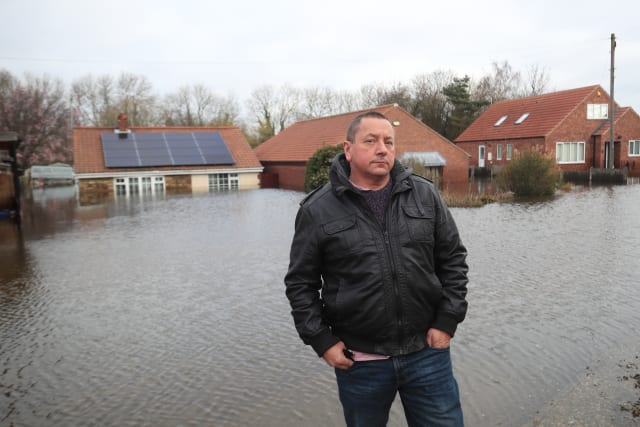 The owner of a bunglalow left almost completely submerged by flooding has said his focus is on preventing the same thing happening to other families in the future.

Kevin Lorryman’s home is just one of dozens in the East Yorkshire communities of Snaith and East Cowick which were inundated a week ago when the River Aire spilled out of its normal washlands, creating a vast inland sea.

Mr Lorryman’s Snaith bungalow has become a symbol of the recent flooding which has affected many areas of England and Wales, with just its roof and its solar panels visible above the muddy, 9ft (3m) deep floodwater.

Despite facing the prospect of his home having to be completely demolished, the 56-year-old said he is keen to make sure no-one forgets the scores of other families in East Yorkshire and beyond in a similar situation.

He said: “I just want people to think about all the other people around here who have been affected.

“There are hundreds. I think it’s 69 houses in total affected in East Cowick, not far away, as well as those in Snaith.

“They are all in the same situation I am in. Even those who’ve just had a few inches, it’s caused a huge amount of damage and it will take a lot of recovery.”

Mr Lorryman is now living in his caravan as prepares to move into a rented house while the home he lived in with his daughter, son-in-law and two grandchildren slowly re-emerges from the receding water.

He said the local community has pulled together in response to the crisis but he wants to see the country more prepared for these situations in the future.

“Going forward, there needs to be action taken at a much higher level to prevent this happening again,” he said.

“East Riding Council teams have come in and everyone here has been brilliant but it needs to be sorted at a much higher level – emergency response teams put in place to respond to these things.

“And we need to build flood resilience in.

Mr Lorryman said he is hoping to use his insurance money to build another home on slightly higher ground on his land.

He said his neighbours had been inundated with donations of clothes and other items but still needed help and urged people to donate to a Just Giving page set up by the community.

More than 150 residents attended a meeting at Snaith Primary School on Monday night where they questioned officials from a range of organisations, including East Riding of Yorkshire Council and the Environment Agency.

The council said 23 homes have been flooded in Snaith, with 65 affected in nearby East Cowick.

Dave Smith, head of human resources and emergency control centre manager at East Riding of Yorkshire Council, said: “While the threat of more flooding is reducing people still need to be vigilant.

“The council and its partners will continue to have an operational presence on the ground for as long as is needed in order to support our residents.

“The council has plans in place to begin recovery activities as soon as possible. However we won’t be able to start until the water levels have reduced significantly and we are confident they will not rise again.”

The clear-up operation in the lower Aire catchment is just one of scores going on around northern England, the Midlands and Wales as the UK continues to experience one of its wettest, and warmest, winters on record.

Across December, January and February, the country was deluged with an average total of 469.7mm of rain, according to Met Office figures released this week.

Last month has already been confirmed as the wettest February on record, with an average of 209.1mm measured across the UK.