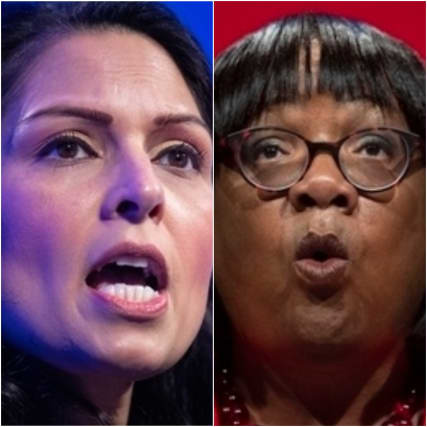 Priti Patel is under renewed pressure from Labour to quit as Home Secretary over allegations that she bullied officials in her department.

Diane Abbott insisted Ms Patel should stand down while complaints against her are looked into.

The shadow home secretary was speaking after Prime Minister Boris Johnson asked the Cabinet Office to “establish the facts” following allegations that Ms Patel had breached the ministerial code in relation to her dealings with officials.

Ms Abbott told BBC Radio 4’s Today programme: “You can’t have a Government that’s at war with its civil servants.

“We want a genuinely independent inquiry – a lawyer-led inquiry and something that can be seen to be independent.

“I’m afraid it would be better if she stepped down.

“We are calling on her to step down whilst the inquiry goes on.”

The comments come after the BBC reported that a former aide to Ms Patel received a £25,000 payout from the Government after claiming she was bullied when the now Home Secretary was then employment minister.

The BBC claims it has seen legal correspondence which alleges that the woman took an overdose of prescription medicine following the alleged incident in 2015.

The Department for Work and Pensions did not admit liability and the case did not come before a tribunal, the BBC said.

Cabinet Office Minister Michael Gove told the Commons the inquiry into Ms Patel was being launched after Sir Philip Rutnam quit as permanent secretary at the Home Office after rows with Ms Patel, with allegations of bullying levelled against her.

“The Prime Minister has expressed his full confidence in her, and, having worked closely with the Home Secretary over a number of years, I have the highest regard for her. She is a superb minister doing a great job.

In a dramatic resignation on TV, Sir Philip accused Ms Patel of orchestrating a “vicious” campaign against him, of lying about her involvement in it and of creating a climate of fear in her department.

It comes amid growing concerns within Whitehall about the treatment of civil servants.