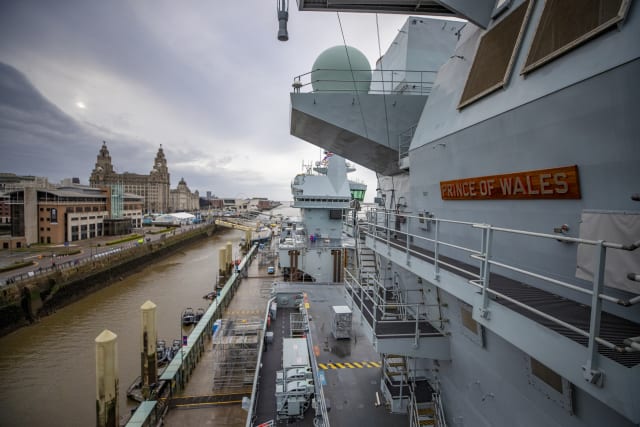 One of the Royal Navy’s most powerful warships is docked in Liverpool this week in her first visit to the city.

HMS Prince of Wales, a 65,000-tonne aircraft carrier, has been docked in Liverpool’s cruise ship terminal since Friday.

Members of the public have been invited on board to explore the vessel and meet the Prince of Wales’ company of 700 sailors.

Launched in December 2017, she is one of the most powerful surface warships ever constructed in the UK.

The flight deck is 70 metres wide and 280 metres long and is designed to carry 36 fighter planes and four helicopters.

On Tuesday, her crew was photographed loading the ship with her complement of Chinook and Merlin helicopters.

The Prince of Wales is matched only by her sister ship, the HMS Queen Elizabeth, which was launched in 2014, although not officially completed until 2017.

The ship is due to leave Liverpool on Friday.