D-Day veteran dedicates MBE to comrades who died at Normandy 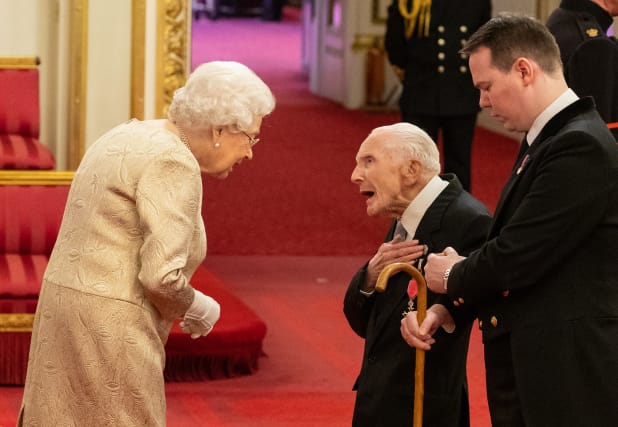 A D-Day veteran who was one of the first British soldiers to land on Gold Beach has dedicated his MBE to his fallen comrades who “inspired” him.

Former Royal Engineer Horace “Harry” Billinge was just 18 when he stormed the beaches in German-occupied Normandy during the landings on June 6 1944.

The horrifying scenes he witnessed stayed with him after the Second World War and inspired him to raise funds to commemorate those who died in the conflict.

Now aged 94, the sapper from St Austell, Cornwall, has received his MBE medal from the Queen for his services to charitable fundraising.

On Tuesday, he was transported to Buckingham Palace in a Bentley to collect the honour at an investiture ceremony.

Mr Billinge, who walks with a stick, said he wanted his MBE dedicated to the 22,442 service personnel killed on D-Day and during the Battle for Normandy.

He said the men who died “inspired him” to raise money in their memory.

Describing the scenes he faced at the Gold Beach landing area in northern France, Mr Billinge told the PA news agency: “It was hell on earth. Murder. The sea was red with blood, human blood.

“Some men were baptised in their own blood. It was a terrible, terrible time. And what for? Not much,” he said while fighting back tears.

“I have been unable to forget D-Day. I could never forget.”

Mr Billinge, who holds France’s highest award, the Legion d’Honneur, said he had raised more than £50,000 for veterans.

As well as collecting for the Royal British Legion Poppy Appeal for 64 years, he has also raised funds for the British Normandy Memorial and was chairman of the Cornwall branch of the Normandy Veterans’ Association.

Speaking after the ceremony, Mr Billinge, who has been married to Sheila for 65 years, said it was “wonderful” to meet the Queen.

“She was very, very kind. There are no words to describe it.”